What an exciting place! The city never sleeps and there is an incredible variety of things to do. Leave all your worries behind and get into the spirit. Nothing in Vegas is real, so just play along. The major Las Vegas attractions are at your beck and command.

In this post, I will concentrate on the northwestern section of the Strip, from City Center to Treasure Island. Here are some of the most well-known casinos in the world.

City Center is one of Vegas’ more recent additions. The mega-complex consists of three (3) hotel/casinos (Aria, Mandarin Oriental, and Vdara), the Veer Towers (residential apartments), and the Crystals, an upscale shopping mall. 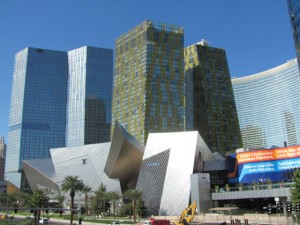 The funky, modern architecture is dramatically different than most places on The Strip. 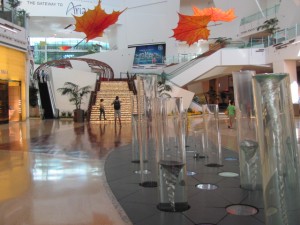 The hotels of this group are also eye-catching — look at the lobby of the Aria below: 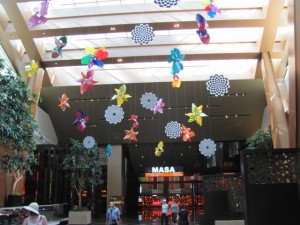 Inside the Aria Hotel

Squeezed between City Center and the Bellagio is another newcomer to the city, the Cosmopolitan. It has become a major player on the Strip.

Further north is the Bellagio, which carries visitors to the Italian Lakes Region. Its lagoon is the scene of one of the city’s most popular freebies: fountains erupt and dance across the lake, choreographed to music. It is truly a must-see Vegas attraction. 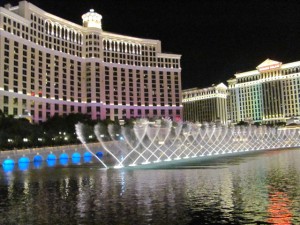 Dancing Fountains at the Bellagio

Next in line is one of the largest properties on Las Vegas Boulevard. Caesar’s Palace gives visitors a glimpse of old Rome with its palatial architecture. 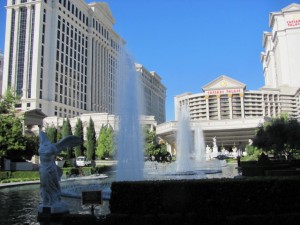 Further northward is the Mirage, with its South Pacific island theme. The interior boasts a veritable tropical rain forest of plants while the exterior features another of Las Vegas’ popular sidewalk spectaculars, an erupting volcano. 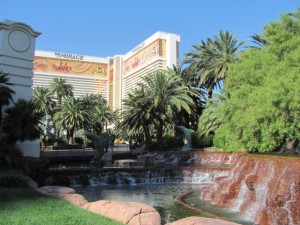 Next to the Mirage is Treasure Island, a hotel and casino featuring a pirate theme. In the evenings a battle involving pirates, called the “Sirens of TI,” takes place on the lagoon in front of the hotel. 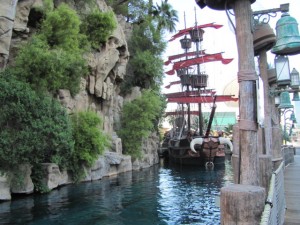