Our long and exhausting Saturday began with a good breakfast at the Hampton Inn, Alexandria. We headed first for the Eastern Market, a legend on Saturdays in DC where several of the girls bought trinkets. 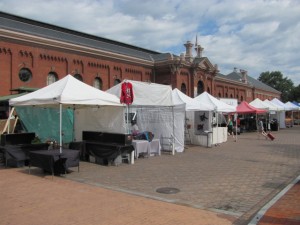 It is a great place and we would have liked to spend more time. However, the memorials await. Our first stop on the National Mall was the Vietnam Veterans Memorial, that very moving wall of 58,000+ men and women who gave their lives in Southeast Asia from 1959 to 1975. 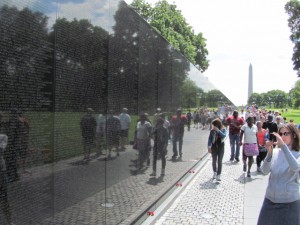 We also stopped briefly at the Statue of typical Vietnam Soldiers, looking at the Wall. 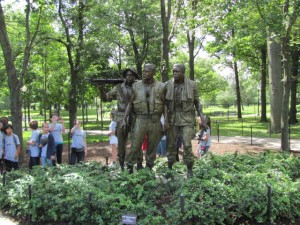 Then we walked westward to the Lincoln Memorial, one of the most beautiful tributes to one of our greatest presidents. 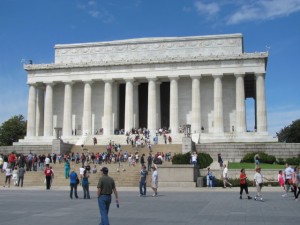 The seated statue of Lincoln by Daniel Chester French seems to capture the man’s integrity and seriousness of purpose. 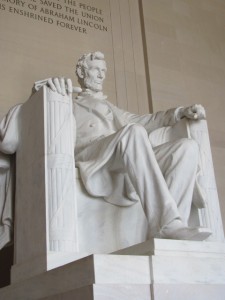 From here we began to work our way eastward, first to the Korean War Memorial, with its own wall of remembrance 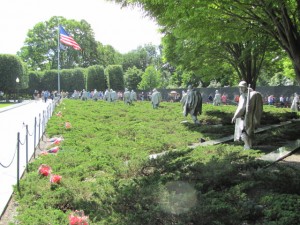 and then to the brand-new Martin Luther King Memorial. This newest addition to the National Mall captures the essence of this complicated man who was so devoted to peace and harmony. 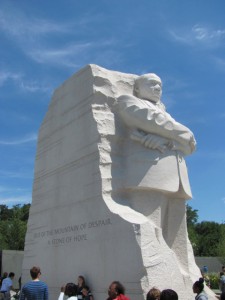 World War II was our next stop. It is divided into two sections, the Atlantic Campaign (European Theater) and the Pacific Campaign. 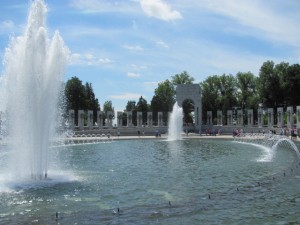 Next on our list was the Franklin Delano Roosevelt Memorial, with its rooms of remembrance and elaborate tribute to our longest-serving president. 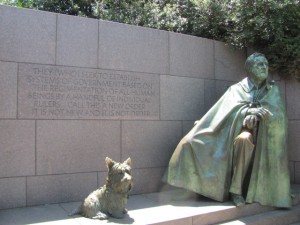 Last but not least was the Jefferson Memorial which dominates the Tidal Basin. Our third president is forever remembered as the author of the Declaration of Independence. 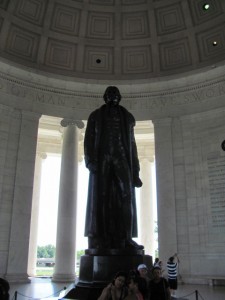 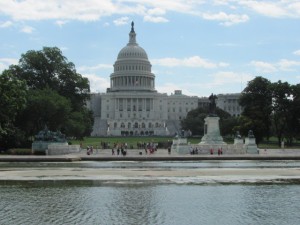 and the Supreme Court Building. 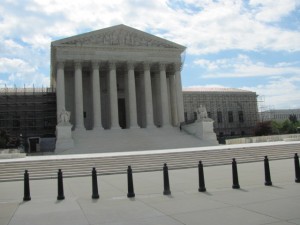 At this point we were all very tired from all the walking and were experiencing some overload, so we headed northwest to Georgetown for some sustenance and spirits. Georgetown is one of DC’s busiest and most charming neighborhoods. 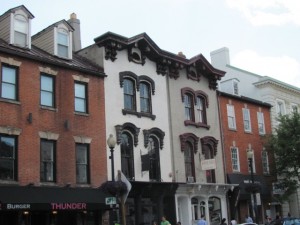 Now that we were revived again, we decided to spend an hour or so in the National Museum of Natural History. Here we enjoyed looking at and learning about Dinosaurs 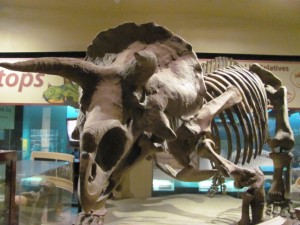 and gems and minerals such as the Hope Diamond. 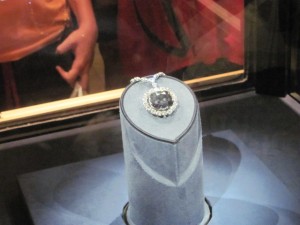 We finished our “most excellent” day with a wonderful dinner at the Warehouse Bar and Grill in Alexandria and then a look at some of DC’s attractions at night. 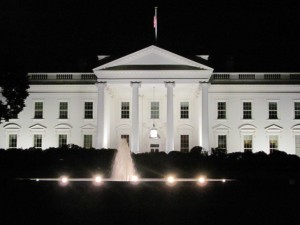 This entry was posted in Trips and tagged US Travel. Bookmark the permalink.