Armories are beautiful places. Despite their purpose which implies violence and destruction, they are use designs associated with castles, making them particularly interesting. Older states like Rhode Island typically have armories which have existed for sometimes hundreds of years. The are distinctive and often historically significant. This post will highlight some of the most impressive Armories of Rhode Island.

The Warren Artillery Armory, on Jefferson Street, dates to 1842 and was built in the Gothic Revival style.

The Newport Armory, on Thames Street, was used for its original purpose from 1894 to 1980. Currently it is an Antique Shop, but it was recently given back to the City of Newport — its basement may become a boating facility. 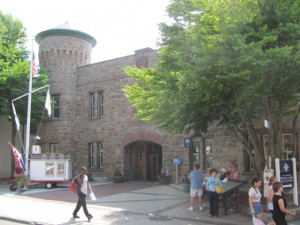