Delightful European cities, an African city which is fraught with mystery, and the tallest mountain on Earth make up this interesting compilation of the best travel destinations in the world.

65.  Barcelona, Spain — This city has a rich tradition with elements spanning almost 2,000 years. It has thrived because of its location on the southeastern coast of Spain. The city has a wealth of attractions, many of which revolve around its most famous architect, Antonio Gaudi. His work can found (and should be found and savored) throughout the city (Walking Tour available for purchase on website).

64.  Vienna, Austria — The lovely city of Vienna was once the capital of the Holy Roman Empire. Its classic architecture harkens to those regal days. It is also a city of music, from Mozart to Strauss, and this aspect of Vienna must be experienced by the visitor. It is also a city of grand palaces, from the Hofburg to Belvedere to Schonbrunn. (Walking Tour available for purchase on website)

63.  Marrakech, Morocco — Another of the Imperial Cities of Morocco, Marakech is located along several major caravan routes and has been a center for trade and commerce for almost 1,000 years. The medina is a labyrinth of narrow streets and alleyways and is a great place for wandering. The central marketplace, Jemaa0el-Fna is the heart and soul of the city. All manner of product can be purchased, and entertainment and other commercial enterprises, such as, snake-charming, water-selling, money-changing, are ubiquitous. (Walking Tour available for purchase on website)

62.  Mount Everest, Nepal/Tibet — The Earth’s tallest mountain, over 8,000 meters, almost 30,000 feet high, is still growing between 1 and 2 centimeters per year as a consequence of the collision of the Indian Plate with the Asian Plate some 70 million years ago.

61.  Madrid, Spain — Madrid displays a royal elegance; the architecture is stately; the museums are world-class; even the bull ring is top-of-the-line. Spend some time in the grand square, Plaza Mayor, or stroll through Retiro Park, once a royal hunting ground. (Walking Tour available for purchase on website) 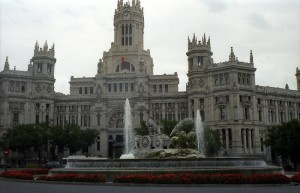