This wonderful group includes two locations in Mexico, two in Europe, and one in Australia. It’s no wonder that Gary has chosen these sites as some of the best travel destinations.

35.  St Petersburg, Russia — Now that St Petersburg has reemerged in royal splendor from its years of deterioration and decay under Communism, it has become the major tourist destination in Russia. Its premier museum, the Hermitage, housed in what was once the winter palace of the Tsars, has collections which rival the Louvre or the Metropolitan Museum. Churches such as, St Isaac’s and the Church of Our Savior on Spilled Blood compete with St Basil’s in Moscow as the most elaborate and ornate in the country. Just outside the city are several incredible “summer” palaces which must be seen to be appreciated. (Walking Tour available for purchase on website)

34.  Chichen Itza, Quintana Roo, Mexico — The “City of the Water Wizards” is probably the best-preserved of the ancient Mayan sites in all of Mexico. Archaeologists think the city may have been home to 35,000 people at its zenith, from about 800 to 1100 AD. The most impressive ruin is El Castillo, a huge pyramid dedicated to the god, Kukulcan, the local equivalent to Quetzlcoatl of the Aztecs.

33.  Ayers Rock (Uluru-Kata Tjuta National Park), Australia — Here is the world’s largest monolith; its image conjures up visions of Australia’s Outback and its native Aborigines. The area is extremely remote, very near the exact center of the continent. However, its popularity has dictated that it become accessible and it has. The rock itself is striking, dramatically rising from the arid landscape to a height of almost 350 meters (1,100 feet). And it is truly huge, with a circumference of approximately 9 kilometers (5 miles)

32.  Teotihuacan, Mexico — The ruins of this Aztec city are located a mere 30 miles from Mexico City. The city actually pre-dates the Aztec culture but was abandoned by the builders around 650 AD and later used by the Aztecs. Stroll along the city’s main street, the Avenue of the Dead, to appreciate its size and scale. 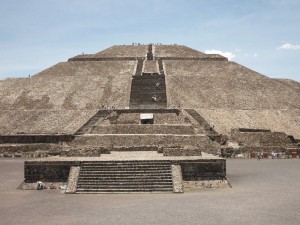 Pyramid of the Sun, Teotihuacan

31.  Prague, Czech Republic — Prague’s designation as the “Paris of the East” is certainly well-deserved. Its beauty and elegance are unchallenged. Its Old Town Square, Starometske nam, is one of the loveliest in Europe. Spend at least 3-4 days here to truly savor the city’s ambience. (Walking Tour available for purchase on website) 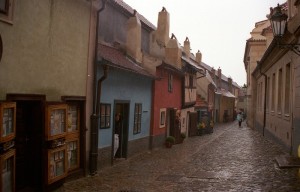