Squares, or plazas, or piazzas, or places are great tourist stops. They are usually a beehive of activity, with restaurants, shops, street performers, and often major attractions. They are great places for people-watching and frequently offer a respite from sightseeing since they are places to relax and have a glass of wine or beer or a cup of coffee or tea.

In this series, I will list my favorite squares around the world, with the reasons why they are special. I will present them in groups of five (5) although I will not attempt to rank within the group. However, groups are ranked; group 1 is my all-time favorite 5, while group 2 is next, etc.

Markt Square, Bruges, Belgium* — Here is a lovely square surrounded by intriguing architecture. From typical Dutch houses, tall and narrow with stepped roofs, to classic government buildings to tall towers, this plaza has everything. Of course, it helps that it is located in the unbelievably charming and well-preserved town of Bruges. 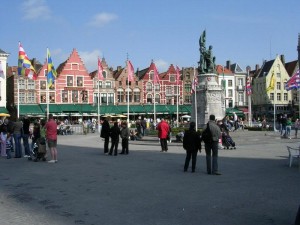 Trafalgar Square, London, England* — London’s major gathering place is great for people-watching and pigeon-feeding. Thousands of people congregate here during the day, meeting an old friend, taking a rest from sight-seeing, or just passing through. The square is punctuated by a tall, stately column dedicated to Admiral Nelson, who defeated the French Navy at the Battle of Trafalgar. Notable buildings in the vicinity are the National Portrait Gallery and St Martin-in-the-Fields Church. 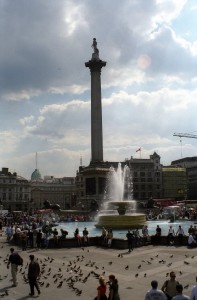 Piazza San Pietro, Vatican City* — The central focus of the Roman Catholic religion is this glorious square, designed by Michelangelo. His crowning achievement, St Peter’s Basilica, anchors the huge square, seen often in the news when the pope addresses his flock. Much of the square is ringed with a colonade of marble columns topped with statues of popes. 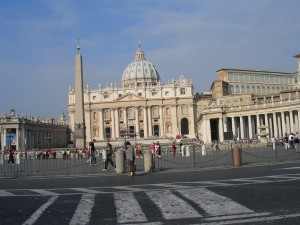 Plaza Mayor, Madrid, Spain* — This is certainly one of the most elegant squares in the world. The large plaza is surrounded by symmetrical buildings of the same color and there are colonnades beneath them as well as arches into and out of the space. Again, there are many restaurants and shops for diversion and there are always hundreds of people strolling through or around the area. 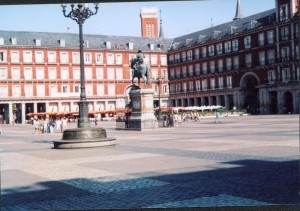 Times Square, New York, New York, USA* — The last of this group is one of the most popular and fascinating “squares” in the world. It is certainly not a square in the traditional sense, since it occupies several blocks of real estate where Broadway and 7th Avenue intersect. Besides the presence of thousands of people over the course of a day, the “square” sees thousands of cars traverse it each and every day. On New Year’s Eve, hundreds of thousands gather to welcome in the next annum by watching a ball fall in a countdown witnessed by millions on TV. 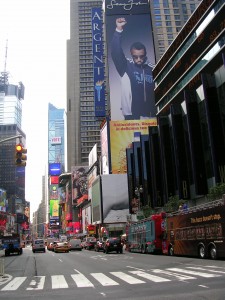 * All these locations are included in my walking tours of each city. Check them out by clicking on “Walking Tour Store.”.