Shalom Jerusalem — we are leaving you but not forgetting you.

We made our first stop of the day in Bethany, the place where Jesus raised his friend Lazarus from the dead. He was friendly with the entire family (Martha, Mary, & Lazarus) and used to spend time here to get away from Jerusalem for a while. The church where Father John said Mass is called the Sanctuary of Bethany 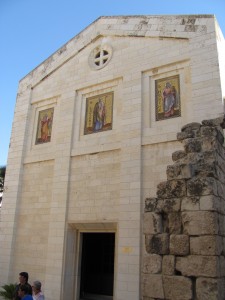 and is another lovely church designed by Berluzzi. The altar is especially beautiful. 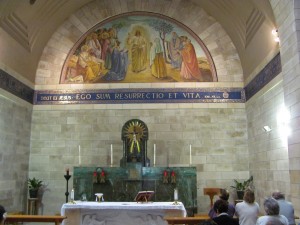 After we left, headed for the Dead Sea, we made a short detour to a panoramic point overlooking Wadi Qelt, a section of the Judean desert. 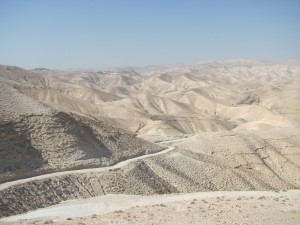 The landscape here is both otherworldly and beautiful.

Next we spent a short time in Jericho, an oasis in the desert which claims to be the oldest continuously inhabited city in the world. It is at least 3,000 years old and figures prominently in the Old Testament. The abundance of water is evident with all the palm trees and other crops and even in the center of town. 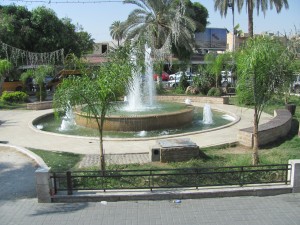 Here we saw the Sycamore tree where Jesus spoke with a local tax collector and granted him salvation. 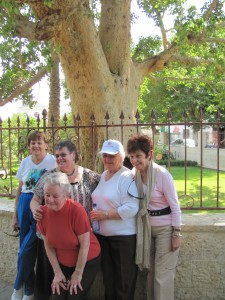 Lee & the girls with Sycamore

We also saw the Mount of Temptation where Christ spent 40 days in conversation with the Devil. The Devil offered him the earth if he would pay tribute — NOT!

Next up was Qumran, the location where the Dead Sea Scrolls were discovered in 1947. The area is now a national park. Entrance to the park provides visitors with an introductory film about the people who wrote the scrolls (the Yaha). Following the film, groups are directed along a self-guided path through the village ruins,

with well-labeled stops along the way. The end of the trail brings visitors to one of the actual caves where the scrolls were found. 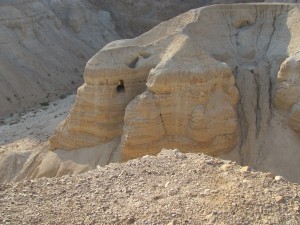 From here we got our first glimpse of the Dead Sea where we will be staying for several days. 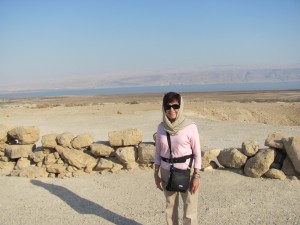 The remainder of our journey was a picturesque route along the shore of the Dead Sea, with Jordan to the east. We made a brief stop at En Gedi National Park, preserving an area frequented by ibex. Unfortunately, all we saw were some rock hyraxes. We were pleasantly surprised when we reached our hotel, the Meridian David — we have a lovely balcony with a wonderful view of the Dead Sea. 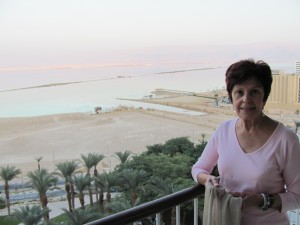 Lee on our balcony