Today involved a lot of driving. From our hotel we headed for the coastal city of Haifa: Israel’s busiest port on the Mediterranean Sea. We first visited the magnificent Bahai Gardens & Shrine, the centerpiece of the Bahai religion, the world’s newest monotheistic religion. The Bahai people believe that all the major world religions are manifestations of the presence of God, so Buddha, Mohammed, Jesus, and Elijah, for example, are all related and connected since their messages are so similar.

The gardens are incredibly manicured: they consist of 18 terraces of hanging gardens, 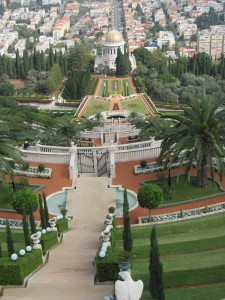 along with stone eagles and peacocks. The golden-domed shrine contains the remains of “Bab,” the second leader of the sect. 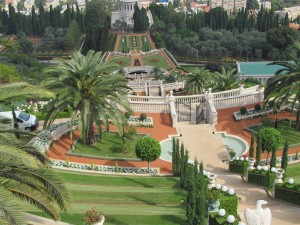 Nearby is a Carmelite Monastery, built over the caves where the prophet Elijah hid from the cruel and calculating King Ahab & Queen Jezebel. Father John said Mass here, in St Elijah Church.

Next we drove to the highest point in the Carmel Mountains, to another Carmelite property, commemorating the victory of Elijah over the prophets of Baal. Here there is an imposing statue of Elijah, slaying the Baal prophets after his victory. The site is known as Muhraqa. 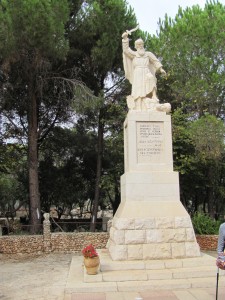 After a very nice and inexpensive lunch at a Lebanese restaurant (Layala el Karmel), we headed for Caesarea, a Roman city built by King Herod (completed around 10 BC). The city is now in ruins, but we explored its history with a well-done film and a walk through the site. Notable structures of the city include the Amphitheater, still in use today for various entertainment events, 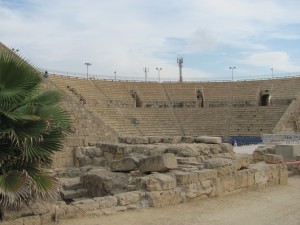 the Hippodrome, a huge oval arena where chariot races, etc were held, 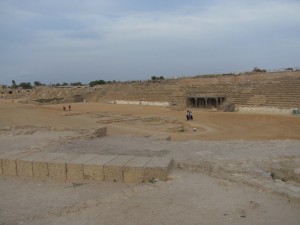 the Druze Tower, which once served as a lighthouse. 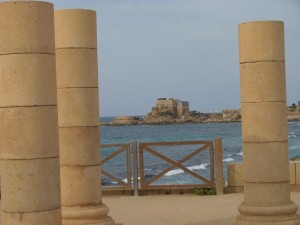 Nearby, we stopped briefly at the Roman Aqueduct (remarkably well-preserved) which supplied the city of Caesarea with water. 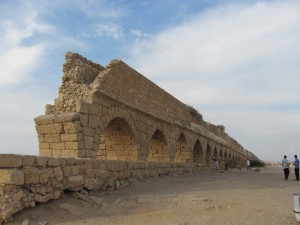