Bangkok, Thailand, is a city of contrasts. The modern trappings of a twenty-first century city are juxtaposed with many of the old traditions of a Southeast Asian third-world nation. The effect, however, is enchanting, and Bangkok is adept at winning the hearts of most visitors, no matter where they are from or what they expect. Bangkok is also intoxicating as a result of its incredible variety of foods and aromas. Because of the traffic in the city as well as the sheer volume of people, the best ways to get around are by water taxi or by walking.

Many of the city’s premier sights are in the vicinity of the Royal Palace, so can be included in a walking tour of this area. 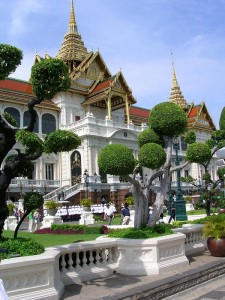 Within the Royal Palace itself, be sure to check out the Chakri Maka Prasad, which has Victorian elements, Dusit Hall, 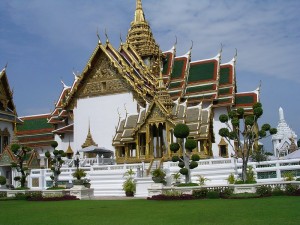 which has a mother-of-pearl throne, and Amarinda Vinichai Hall. Next to the palace is one of Bangkok’s most exceptional temples, Wat Phra Kaew, the Temple of the Emerald Buddha, 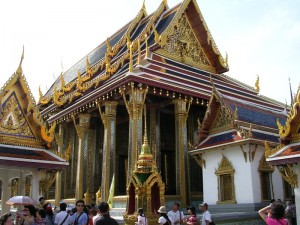 which holds Thailand’s holiest Buddha Statue. Note the murals depicting the life of Buddha. The palace and Wat are dazzling in their finery and a definite must-see for all visitors.

Wat Pho, the Temple of the Reclining Buddha, is also near the palace complex and is the oldest and largest temple in Bangkok. This statue of Buddha is 151 feet (46 meters) long and 49 feet (15 meters) high. 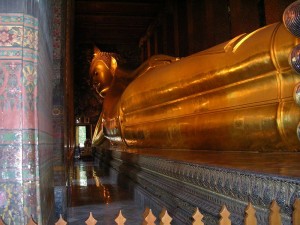 Also nearby is Wat Mahathat, with its sitting Buddha, now home to a Buddhist college. Other attractions in this area include several of Bangkok’s best museums.

Just across the Chao Phraya River is the Wat Arun (Temple of Dawn) who’s Prang (tower) is about 80 meters (250 feet) tall and is inlaid with porcelain and ceramic tiles. Views from the terraces are fantastic. 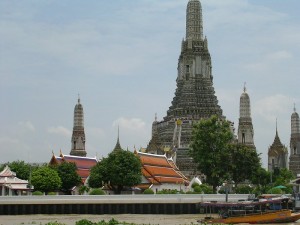 Additional sights in the city include the following: Wat Saket, 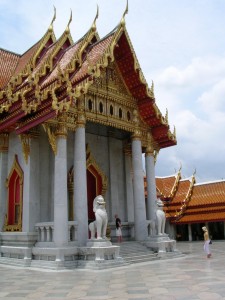 with its marvelous Golden Mount, which also affords great views from the top; 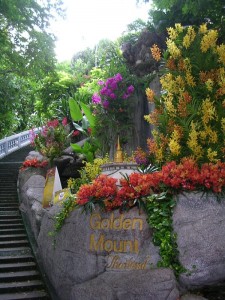 Other noteworthy attractions include the lovely Marble Temple, a large complex of beautiful structures and well-kept grounds. 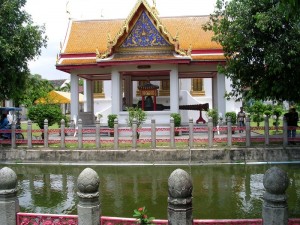 and the kitschy Standing Buddha. 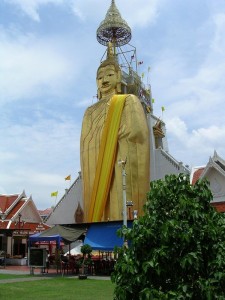 1. A visit to one of Bangkok’s Floating Markets is becoming a must-see these days after its feature in a recent James Bond film. Probably the best bet for this chaotic but delightful experience is the Damnoen Saduak, in Sangkhram Ratchaburi Province, about 80 kilometers (50 miles) from the city..