Devil’s Tower is a huge monolith rising above the landscape of Eastern Wyoming.  It has long been a sacred place to Native American tribes (as a matter of fact, their legend about how Devil’s Tower was formed is much more interesting than the scientific explanation). The location was featured in the movie, “Close Encounters of the Third Kind”.  Devil’s Tower was also the United States’ first national monument.

The sight of the monument is extremely dramatic, since there is no other relief in the vicinity.  It rises precipitously 870 feet (almost 300 meters) above the plain.

Take the short hike from the Visitor Center to get close to the ancient volcanic remains for a different perspective or take the Tower Trail which circles the monolith. 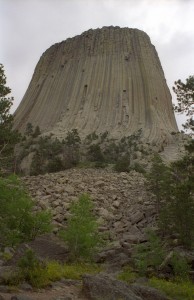 The monument is obviously also popular with mountain-climbers. They can be seen frequently, dangling from the sheer rock. It is certainly impressive, no matter what the angle of view. 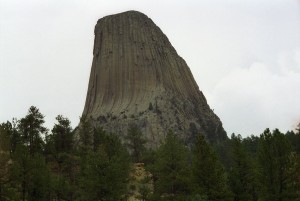 Stop on the road leading to the Monument to observe an active Prairie Dog village.  The kids will love it!.