The Greek Islands dot the Aegean and the Adriatic Sea in the eastern part of theMediterranean.  They are known the world over for their special, whitewashed beauty and their storied history. There are actually several groups of islands: the Ionian Islands, which lie west of the Greek mainland; the Cyclades, which were named for the fact that they form somewhat of a ring around the central island of Delos; and the Dodecanese Islands, which are the most easterly of the Aegean islands, many of them quite close to the mainland of Turkey.

Santorini is usually billed as the most beautiful, most unforgettable Greek isle, and it does not disappoint.  Most people arrive at the island via cruise ship — certainly the most dramatic approach.  The current island is all that remains of a large volcano, From the moment the ship enters the caldera, all are on deck to witness the breath-taking event.  Beautiful, pure white villages spill over steep cliffs of dark volcanic rock and look out over the caldera of an ancient volcano far (over 1000 feet) below which has been filled in with Aegean Sea — it’s quite a postcard. 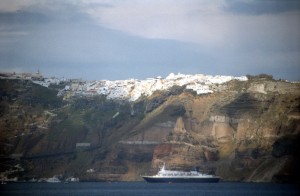 The event that created the Santorini of today occurred in 1450 BC, when the volcanic island erupted.  The eruption is credited with destroying much of the island itself, but also the palace of Knossos, on the neighboring island of Crete, by causing the ignition of casks of olive oil which created huge fires.  The resulting tidal wave drowned the Minoans and marked the end of that civilization.  Many scientists feel that this volcanic eruption which also destroyed the Minoan community on Santorini, was the source of the legend of Atlantis, the lost continent.

Ships can only moor in the harbor and then tenders are used to bring visitors ashore.  Next is the trip to the rim of the crater.  There are three (3) choices:  1. On the backs of donkeys, 2. By foot, walking up the numerous switchbacks, trying to avoid the piles of donkey poop, 3. By funicular (6 tandem chairlifts)

In the village of Thira/Fira, the main town on the island, the labyrinthine alleys are lined with hundreds of shops and restaurants.  However, the view is the thing!!  Looking down or up is positively breath-taking, certainly one of the most picturesque spots on earth. 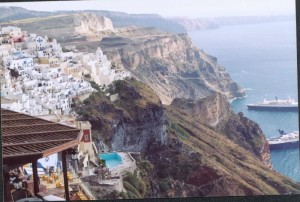 Churches are everywhere on the island. Check out this beautiful church in Thira. 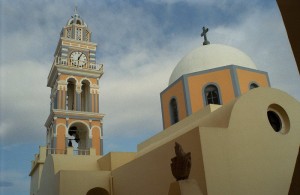 Ia (another smaller village on the western rim of the crater) is also extremely photogenic with its blue-domed churches and narrow alleys. 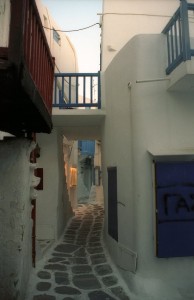 lined with shops and chapels, spreading out below a ridge of white-washed windmills. 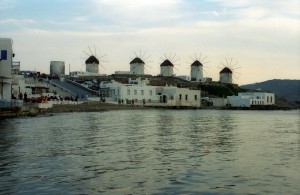 It is lovely just strolling the streets, backtracking often because of dead-ends, getting lost but not worrying because downhill always means toward the harbor.  It is relaxing to sit at a small table, outside a bar in “Little Venice”, an area of town with buildings directly over the water, 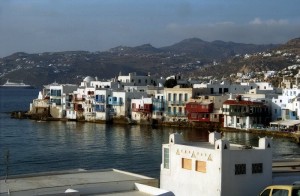 watching “Petras”, the resident pelican, strut about and taking pictures of the town.  This island is incredibly picturesque

The island of Rhodes is located very close to the Turkish coast, but still belongs to Greece.  It has a long tradition and history.  The town of Rhodes is a beautiful walled, medieval city. 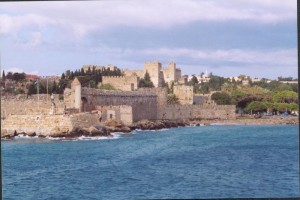 The streets are cobblestones, for which the town fathers used smooth beach stones — very unusual and attractive.

Rhodes harbor was once the location of the statue known as the Colossus of Rhodes, one of the original Seven Wonders of the World!  He straddled a section of the harbor until crumpled by an earthquake.  The spot on which he stood is today marked by two columns, each of which is topped with a statue of a deer, the symbol of Rhodes.  Legend says that the island was once populated by many snakes until deer were brought to the island and the snakes disappeared. 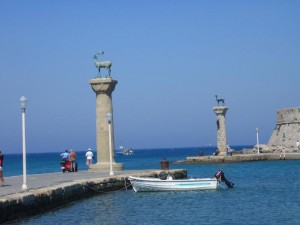 City gates are turreted and built into the walls.  The Street of the Knights (Ippoloton) 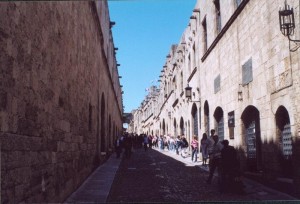 Street of the Knights

leads up to the Palace of the Grand Masters.  The street itself is considered one of the best preserved medieval relics in the world.  The buildings, known as “Inns”, along the street, were where the Knights of St John were housed and are all cultural landmarks in their own right.

The Palace itself is an impressive building which is also built into the city walls.  It contains beautiful, tranquil gardens, great places for a stroll and some contemplation. 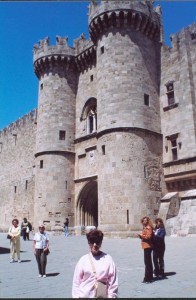 Lindos, another city on the island of Rhodes, is another well-preserved medieval town.  It is a very steep walk up to its famous Acropolis, with its Medieval Castle, Porticos, and Stoas (courtyards). It makes an interesting side trip from Rhodes Town.

Delos, Greece, is one of the North Cyclades Islands and is considered sacred, since, in Greek mythology, it was the birthplace of Apollo and Artemis.  Today, the entire island is an archeological site and is, thus, uninhabited.  Access is available by skiff (caique) from Mykonos and other Cycladic Islands.

Patmos, another island near the coast of Turkey, is also a favorite stop for cruise lines. This island is famous as a Christian pilgrimage site, associated with St John the Theologian, who wrote one of the Gospels, as well as the Book of Revelations, in the New Testament.

St John lived on Patmos from 95 to 97 AD (when he was an old man) and was exiled during that time.  He wrote “the Apocalypse” as a result of visions he received inside a grotto or cave which can be visited.  According to legend, he listened to God’s revelation while lying in the cave and the cave wall was split during the vision.

From the cave, visitors are led to the highest hill of the island where a Monastery was built, in the 11th century, dedicated to the memory of St John.

The Monastery is still in operation and contains a beautiful church, with frescoes from the period. 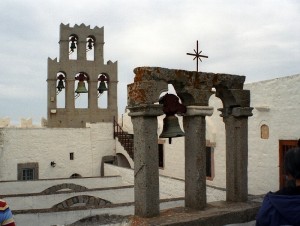 The museum on the grounds has numerous artifacts on view which have been left by pilgrims with the Monastery, notably a painting by El Greco and some relics given by Catherine the Great of Russia.  The Monastery area also provides a great view of the island and its Aegean coastline.

Corfu is one of Greece’s Ionian Islands, located just west of the mainland, in the Adriatic Sea, just off the coast of Albania.  It was the residence of Homer, ancient Greece’s most famous writer/historian. The island itself is lovely and Corfu Town is a pleasant-to-walk, medieval metropolis whose architecture combines many cultural influences, since the island was another of the crossroads between East and West, and because of its proximity to Italy, especially Venice.  Attractions which should not be missed include the Palace of St Michael and St George, which, today, houses several museums, the Old and the New Fortress, obviously erected for defense, the Esplanade, lined with beautiful homes, and the Church of St Spyridan, with its tall red-domed bell tower.

Knossos, the ancient palace of King Minos and the center of Minoan civilization, is located on the island of Crete, the largest and most distant of the Greek isles. The Minoans existed from 2000 to 1450 BC, and Knossos is a tribute to their wealth and power.  The palace was also reputed to house the labyrinthine chambers which were home to the Minotaur, a legendary half-man, half-beast who ate humans.

Knossos was first excavated by Sir Arthur Evans, an Englishman, in 1900.  Evans restored some of the palace and has been criticized by many archeologists because he tampered with the ruins.  Others feel that the restoration makes the place come alive and adds a certain richness to the experience.  Whatever the visitor feels about this issue, it is still amazing to walk around in an area that was occupied 4000 years ago.

The Minoans were extremely resourceful.  They had indoor plumbing and also had a system of clay pipes used to transport water to the palace from a mountain 10 kilometers (6 miles) away.  The columns holding up the walls were made of the trunks of trees and are wider at the top and narrower at the bottom because the trees were used upside-down.  Builders thought the “green” wood would lose its moisture faster in this position, and they were obviously right, since many have survived to the present day.

There are huge clay cisterns in the chambers which held water, olive oil, etc. 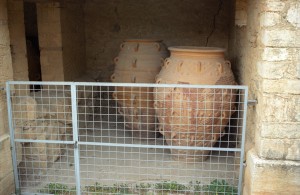 and the chambers of the king and queen are decorated with beautiful frescoes, the originals of which are housed in the Archeological Museum in Heraklion, which should also be visited.

Unfortunately, the destruction of the Palace of Knossos by an earthquake and fire in 1450 BC also marks the end of the Minoan civilization.  The event which led to this destruction was the eruption of the volcanic island of Santorin (see above).  Archeologists are convinced that accompanying earthquakes caused the ignition of casks of olive oil which burned much of the palace (some wood from the palace shows charring), and a subsequent tidal wave from the Santorini eruption killed all the Minoans.

1.  A great view of the city of Rhodes can be obtained by climbing the Byzantine Clock Tower (83 steps).  Those who pay for the opportunity are rewarded with a free beer after returning to ground level.

2.  There are a number of other Greek islands which merit mention. These include Naxos, once dubbed the most beautiful of all the islands by both Herodotus and Lord Byron, with its marble streets and Venetian homes, Lesbos, one of the largest and most affordable of the islands, Ios, which has become a major gathering place for the young people of the world, and Hydra, very close to the mainland and popular as a weekend getaway from Athens..