Jerusalem, Israel, is, without question, one of the most important tourist sites in the world. It is and has been a pilgrimage site for worshippers of three of the world’s major religions: Christianity, Judaism, and Islam. Unfortunately, it is also an area of tremendous unrest and conflict, which makes travel here extremely risky at certain times.

The focus of tourism in Jerusalem is the old, walled city, a tight maze of cobblestone streets which is actually composed of four ethnic neighborhoods, the Jewish Quarter, the Armenian Quarter, the Muslim Quarter, and the Christian Quarter, which coexist but try hard not to co-mingle.

Must-see sights in the old city include the Church of the Holy Sepulcher, a church built on what is thought to be the site of the crucifixion of Jesus of Nazareth, the founder of Christianity. 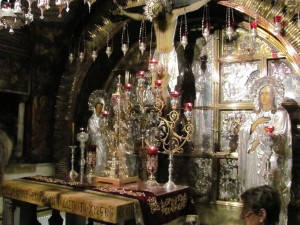 Altar of the Church of the Holy Sepulcher

The church itself is shared by several Christian religions, Roman Catholic, Armenian, Greek Orthodox, and Copt, and preserves several important relics, for example, the Stone of Unction, where Jesus was prepared for burial, and Golgotha, the hillock where the actual crucifixion took place. 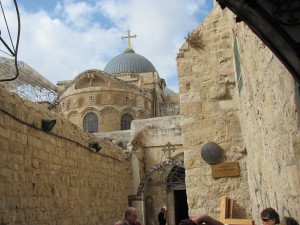 Another important tourist attraction is the Dome of the Rock, and the area on which it sits, the Temple Mount, site of the original Judaic temple, built by King Solomon, and thought to be the location where Abraham prepared to sacrifice his son, Isaac, as described in the Old Testament. It is also considered to be the spot where Muhammad rose into heaven to receive Islam’s teachings from God. 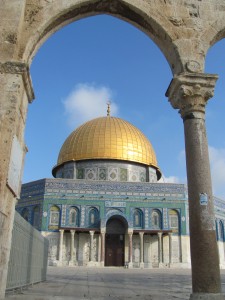 A third major focus for tourists is the Western Wall, which is an extremely holy site for Jews. They believe that this wall was a remnant from theTemple Mount built by King Herod, and Jews from all over the world come here to pray and offer devotion. 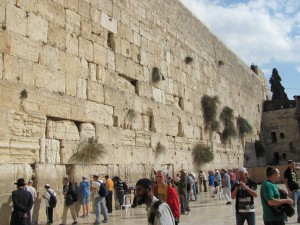 The Via Dolorosa is a walk along what is thought to be the route that Jesus Christ took when led to his crucifixion. It is displayed in almost every Christian church in the world as the “Stations of the Cross”. “Processions” take place frequently and involve prayers at the various stops (“Stations”) along the way. This pilgrim path takes about an hour (note that the last 5 “stations” are inside the Church of the Holy Sepulcher). 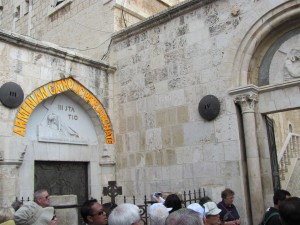 Stations 3 & 4 on the Via Dolorosa

In West Jerusalem, tourists will find the very worthwhile Israel Museum, which, besides some wonderful art, displays the Dead Sea Scrolls, the oldest manuscripts of the Old Testament, dated to the second century B.C. 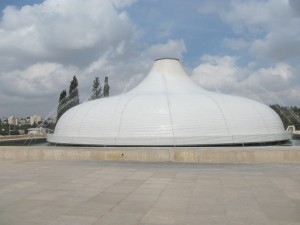 Shrine of the Book -- Israel Museum

and the Yad Vashem, a very emotional memorial to the Holocaust. 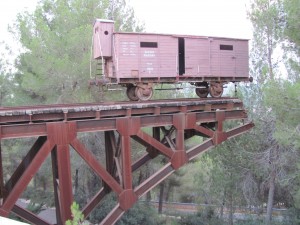 A popular excursion from Jerusalem is to Bethlehem which lies in the area, just 10 kilometers (6 miles) east of Jerusalem, known as the West Bank, because it is located on the western bank of the Jordan River. It is a particularly holy pilgrimage site for Christians because it was the birthplace of Jesus of Nazareth. The actual stable where Jesus was thought to be born is below Manger Square, the central plaza in Bethlehem, and, on the square, in commemoration of this pivotal event, is the Church of the Nativity. 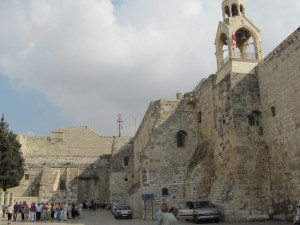 1. For a classic view and great photograph of the city of Jerusalem, drive or take a cab to the Mount of Olives Observation Point, east of the old city. 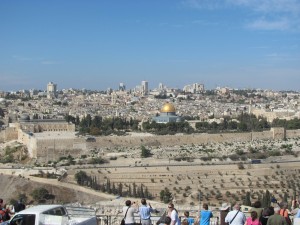 Mount of Olives View of Jerusalem

2. Visitors can walk the walls of the old city, gaining access at either the Jaffa Gate or the Damascus Gate. 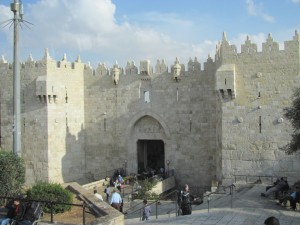