Los Angeles, is California’s and one of the USA’s largest cities.  Weather is typically sunny and mild or hot year round.  However, traffic is a perpetual problem — the freeways are a challenge to negotiate, and the main city thoroughfares are often in gridlock.

In the city, there are numerous museums for those so inclined, but the major attractions are just outside the city center.

One of the most popular gathering places in the city is Farmer’s Market, located at the corner of Fairfax and Third St. Here visitors will find every conceivable type of food, both prepared and fresh. The narrow, crowded, alleys are full of numerous aromas and shops which will entice all who venture here.

Hollywood, California, is the legendary home of famous film stars.  Even though many of them have residences elsewhere now, there are still many who might be glimpsed either in town or on their estates, so that people still flock here on the possibility.  The Hollywood Sign (reduced from its original hollywoodland) is now a famous icon, recognizable throughout the world.  One of the better viewpoints is located in Griffith Park, northeast of the city. Follow signs for the Observatory and either take the photo from the parking area or climb higher via the trail which begins here. 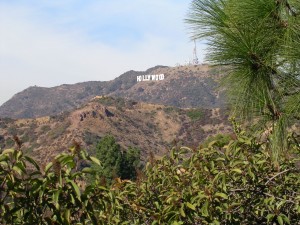 Grauman’s Chinese Theater has immortalized Hollywood celebrities in concrete since 1927.  Most have just left hand prints or footprints, but some have left other reminders of their fame.

Universal Studios is a theme park which attracts millions of visitors each year.  There are two different venues: Hollywood and Orlando, Florida, in the United States. Parks also exist in Japan and Spain.  The theme of all these parks is the movies, and adventure rides, as well as other activities, are focused on this theme.

Also nearby, in the suburb of Anaheim, is Disneyland, the “original” theme park, which, while certainly a scaled down version of its counterpart in Orlando, Florida, is nevertheless extremely popular and perhaps more charming because of its more manageable size. Anaheim has other attractions as well, including the Crystal Cathedral, a church featured on Sunday morning television. 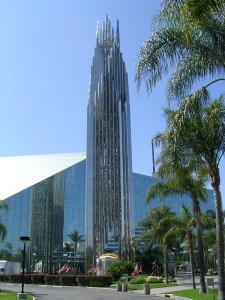 Santa Catalina Island, located off the coast of Southern California, near Los Angeles, has become a major recreational resort and Mecca for saltwater fishermen.  Access to the island is by air or sea, and numerous private companies are available for hire. Activities available on the island include golf, tennis, swimming, horse-back riding, hiking, and all the various types of fishing. The major community on the island is the town of Avalon.

Another possible excursion from Los Angeles is to the remote but interesting Channel Islands National Park, located off the coast of California, in the vicinity of Santa Barbara, which preserves island habitat and breeding grounds for a variety of species. Access is only by plane, private boat, or public concessionaire, and arrangements should be made in advance. Park rangers, and a few other authorized individuals conduct walks on all the islands. There are few facilities on the islands, so visitors are encouraged to provide their own food and water.

A possible inland excursion from the city involves travel eastward to Joshua Tree National Park, in south central California, which preserves an area of desert and mountain habitat of the Joshua tree. The park is noted for its scenery, which is accessible via several park roads. There are hiking opportunities, as well as rock-climbing. Park Rangers conduct tours of Desert Queen Ranch which is located within the park. There are several Visitor Centers which can be accessed from various directions.

For a once-in-a-lifetime experience, travel to LA around New Year’s Day and obtain a ticket for the Tournament of Roses Parade, which is held in the suburb of Pasadena on January 1st each year and which begins at 8:00 AM. This is a parade that people around the world have watched on television for many years, but nothing compares to seeing it first-hand. Visitors can actually walk by the floats early in the morning while they are lined up on Orange Grove Blvd and practically touch them. What is truly remarkable is that they are made entirely of organic materials. The creativity involved in their construction is truly amazing. 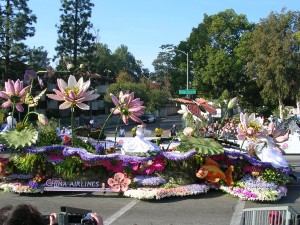