Seattle, Washington is an exciting city in the northwestern corner of the USA.  The waterfront area of the city is the location of the majority of tourist sights, 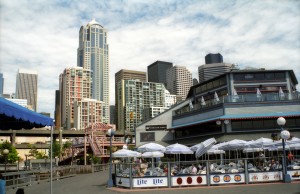 although Seattle Center, a short distance from the harbor, also houses many attractions.

The Space Needle, the symbol of Seattle, is located in Seattle Center, the remnants of the 1962 World’s Fair.  It is 300 meters (605 feet) tall, with an observation deck at the 175 meter (520 feet) level.  It provides the visitor with a dramatic, 360 degree panoramic view of the Seattle Skyline, Puget Sound, the Cascades, and the Olympic Mountains.  There is also a revolving restaurant. In the area are several museums and other children’s activities. There is even a monorail which connects to other parts of the city. 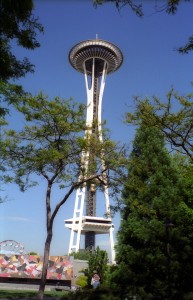 The Pioneer Square Historic District is an area of restored homes and businesses, rebuilt following Seattle’s great fire of 1889.  There are numerous shops and restaurants. 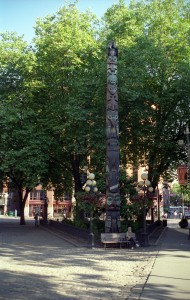 One of the most beloved attractions in Seattle is the Pike Place Market. It opened as a Farmer’s Market in 1907. It is still a popular destination for shoppers and curious tourists, as well as Seattle residents. The fish market is known for its workers who fling fish around as if they were footballs. The area has expanded to offer arts and crafts and flowers, as well as shops and restaurants. 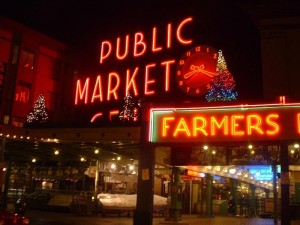 A short distance from the waterfront, pedestrians can take the Pike Place Hill Climb, a skywalk with elevators and stairs, to the market which has been transformed into a major tourist stop.

From the harbor, there are ferries to the Olympic Peninsula, some of the islands within Puget Sound, as well as harbor cruises and whale-watching boats, among others.

Probably the most popular excursion from the city is southeast to Mt Rainier National Park.  It forms a dramatic backdrop for the city when seen from the north or west and offers a comforting presence for both residents and visitors alike.   Comforting may be a misleading word since Mt Rainier is an active volcano and certainly has the potential to devastate the Seattle-Tacoma area.  However, scientists feel that warning signs will be detectable well before any eruption.

1.  Fans of the movie, Sleepless in Seattle, may want to have lunch at the “Athenian”, a restaurant in the Pike Place Market complex, which was featured in the movie, and which has tremendous views of Puget Sound, Elliott Bay and the Olympic Mountains, beyond.

2.  Sometimes there are special exhibits and programs at the observation deck of the Space Needle, such as aliens who frolic in and out of the framework.

3.  Visitors to the area should be sure to taste the Rainier cherries, which are usually very expensive except in the area. They are fantastic!.