Zion National Park, in Utah, is another monument to the forces of erosion and their effect on the landscape.  The difference between Zion and other parks such as the Grand Canyon, is that here, the visitor is at the bottom of the canyon, looking up at all the creations.  The park, as its name suggests, has a religious theme since it was discovered by Mormons who applied various religious epithets to the park’s landmarks.  A shuttle service operates to reduce or eliminate traffic on the Zion Canyon Scenic Drive, the most popular part of the park. 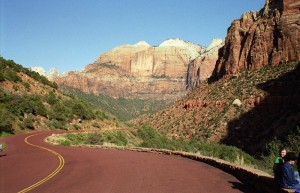 Zion Canyon is the most spectacular and most frequented area with prominent and dramatic features such as, the Great White Throne, 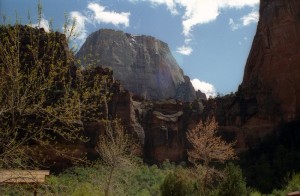 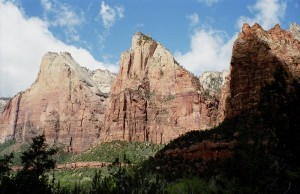 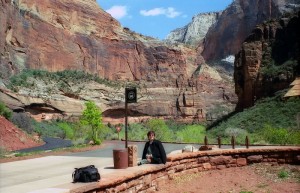 etc., greeting the visitor at every bend of the 5 1/2 mile (8 kilometer) scenic drive.

Walk the trails to Weeping Rock and to Emerald Pool for some different types of terrain and environments.

Other parts of the park require motor travel.  For instance, the Zion-Mount Carmel Highway, which cuts across the southern part of the park, is a state highway and frequently congested because of through traffic. The highway allows access to some very different and unusual landscapes. This area is characterized by smooth, sculpted mounds, interspersed with evergreen trees, known as checkerboard mesas. 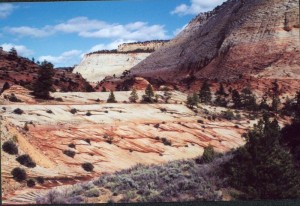 Geologically, this area was once a series of sand dunes which have now been transformed into rock. 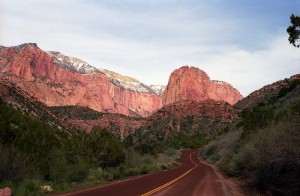 This area, because it is isolated from the major area of the park, has considerably less traffic and crowds..