Waterfalls of the USA — New York

Everyone loves waterfalls! They seem to capture the fancy of adults and children with their noisy tranquility and grace. They are attractions wherever they exist and beckon to travelers that they must be seen to be believed. Some are delicate, some are thunderous; some form a wispy thread of water, some are wide; some descend in small cascades, some just tumble to the depths. The Waterfalls of the USA are a motley lot and can be found throughout the country.

New York is blessed with a large number of waterfalls which are interesting and different.

Niagara Falls  — Niagara Falls is recognized all over the world as one of the premier waterfalls on Earth. It has the highest flow rate of any waterfall on the planet and is the first one mentioned when anyone discusses the waterfalls of the USA. There are actually three (3) separate but connected waterfalls that make up the complex:

American Falls — totally within the USA 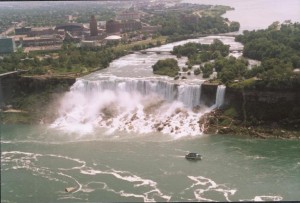 Bridal Veil Falls — located between American Falls and Goat Island. These can be accessed by taking the trail known as Cave of the Winds. 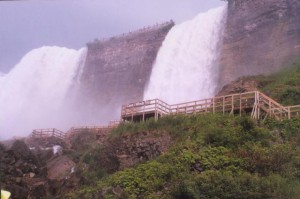 Horseshoe Falls — This is the largest waterfall in the complex and is mostly over the Canadian Border in Niagara Falls, Ontario. 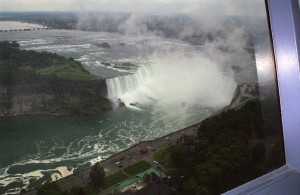 Taughannock Falls — The tallest waterfall in New York State and one of the tallest east of the Rocky Mountains can be found near Ithaca in the Finger Lakes Region of the state. The falls drop 215 feet, over 30 feet higher than Niagara. 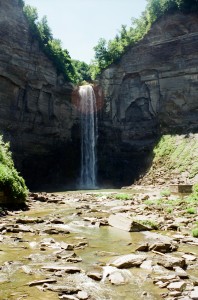 Letchworth State Park — The Genesee River has cut a significant gorge into the landscape of northwestern New York. Known as Portage Canyon, there are three waterfalls created by the river’s descent.

Buttermilk Falls — Another waterfall found in Ithaca is an unusual cascade known as Buttermilk Falls. Visitors to the state park are allowed to swim at the base of the falls. 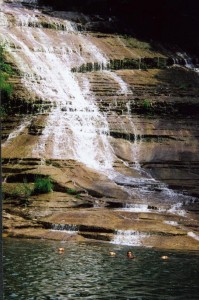 Watkins Glen State Park — Just north of the lovely town of Corning, NY, Glen Creek has cut a gorge into the rocks creating a lovely series of waterfalls and cascades which can be accessed via the Gorge Trail.

A final Finger Lakes Region waterfall is found within Robert H Treman State Park, also in the vicinity of Ithaca, NY. Once again, visitors are allowed to swim at the base of Enfield Falls. 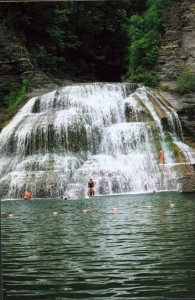