Our adventure begins… We left Fort Lauderdale at 4:30 PM, headed toward the east coast of Mexico and the island of Cozumel. Our ship is the Celebrity Equinox, the 6th largest ship in the world and the current pride of the Celebrity line. It was their “ship of the year” in 2010 and 2011.

We had an opportunity to explore the ship a bit. The ship is absolutely huge. There are approximately 2,850 passengers and over 1,000 crew. It is truly like a small city. The pool(s) area takes up much of Deck 13. 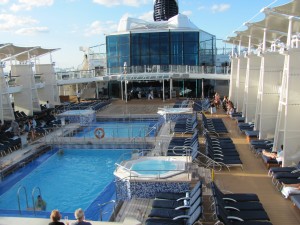 Another interesting part of the ship is the Lawn Club, an extensive area of real grass where croquet and other games are played. 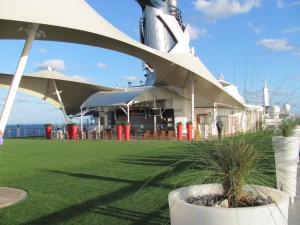 I must say that Port Everglades, the port at Fort Lauderdale is very unattractive. I expected a port area like Vancouver where there are shops and other interesting venues to explore. This place is strictly a shipping port, very industrialized, populated with large fuel tanks and shipping containers. Obviously it was not a candidate for photos. However, once we were under way I took this pic of the Miami skyline. 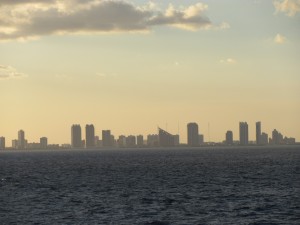 I also asked Lee & Marcia to pose for an initial view of our balcony. 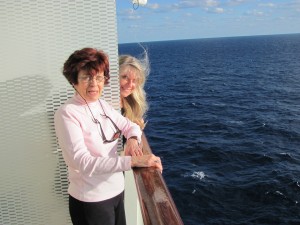