Another highlight of our itinerary! Today we visited one of the world’s greatest engineering accomplishments. The Panama Canal was built by the United States, after a 20-year failure by the French, and finally opened in August, 1914. Since then, over 1 million ships have made the transit across the isthmus, in order to avoid a lengthy trip around the southern tip of South America.

A typical transit takes from 8 to 10 hours, much less time than the alternative. We visited the Miraflores Visitor Center, saw an informative film about the construction of the canal, its operation, and its projected future. Then we witnessed two large commercial vessels negotiating the locks. What an incredible experience! 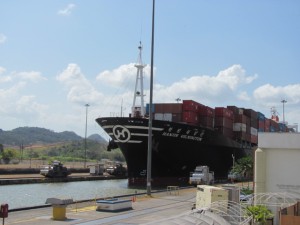 We learned that there are three (3) sets of locks across the isthmus, the Miraflores Locks, nearest the Pacific Ocean, the San Miguel Locks, just east of Miraflores, and the Gatun Locks, on the Atlantic side of the isthmus. The process involves raising a ship from sea level to the level of Gatun Lake (85 feet above sea level), and then lowering the ship back to sea level at the other end. 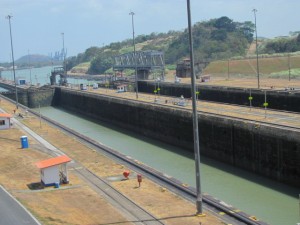 The other segment of our excursion involved a visit to Casco Viejo, the Old City of Panama’s capital. It is replete with Colonial architecture and, although some of the area is in shambles and run down, much has been restored to its old glory. I did not expect to be able to see as much as I did, but I got a chance to wander some of the streets where I found the Cathedral, the largest in Latin America. 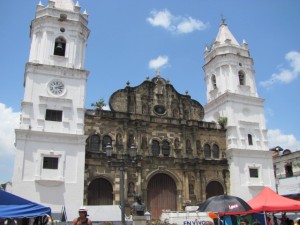 the City Hall, also on the city’s Main Square: 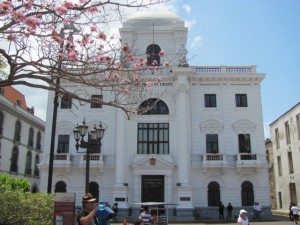 The National Theater is a classic example of Spanish Colonial architecture and the pride of the city. 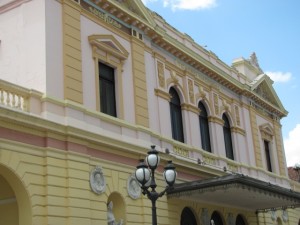 Nearby is the Bolivar Palace, where Panama achieved independence from Colombia about 100 years ago.

The palace sits on a square (Plaza Bolivar) dedicated to the famous South American hero. 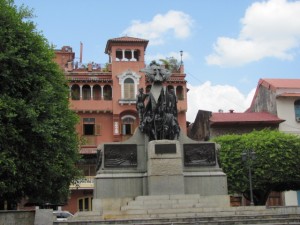 In the French Quarter we walked through an arbor of Bougainvillea which complements a seaside walkway, lined with local vendors. 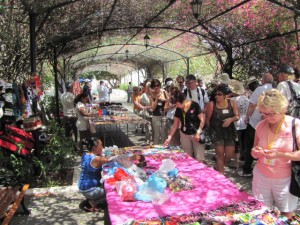 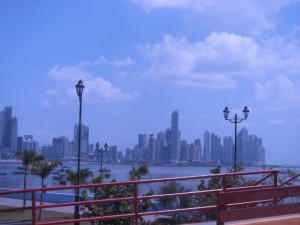