This grouping is extremely eclectic. The sights here are far apart and span the globe. Two are ancient and unusual. Of the two cities, one is thoroughly modern and the other is very old. The fifth sight, among these best travel destinations in the world, is truly unique.

45.  Lhasa, Tibet — In the Khy-chu Valley, within the vast Tibetan plain, between ranges of the Himalayas, sits Lhasa, capital of what was once the sovereign nation of Tibet. This was the home of the Dalai Lama, the head of the Buddhist religion. Politically, things have changed, but the captivating city remains and still draws tourists to the Potala Palace and other religious sites. (Walking Tour available for purchase on website)

44.  Easter Island (Rapa Nui), Chile — This isolated island, about 2,000 miles from the coast of Chile, is noted for its large, stone statues, called Moai. The entire island is shrouded in mystery. For instance, no one knows where the people of the island, the Rapa Nui, came from, nor do we know why they constructed these statues.

43.  Mont-St-Michel, France — The Abbey rises dramatically from the sea as one approaches from the mainland. It is difficult to imagine how someone conceived the idea to build such a structure and the engineering involved in its construction makes one marvel at the skill and ability of medieval stone masons and architects. This is a place that must be seen and savored for its age (begun in 708 AD) and uniqueness. 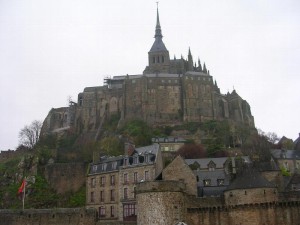 42.  Washington, DC, USA — A must-see for all Americans, the capital of the United States is appealing to foreigners as well for its incredible architecture and numerous monuments. The best part of Washington is the fact that most of the city’s attractions are free. A major draw is the world’s largest museum, the Smithsonian.  (Walking Tour available for purchase on website)

41.  Borobudur, Java, Indonesia — Borobudur contains the largest Buddhist temple in the world. The temple, like Buddha’s path to enlightenment, has ten levels and is topped by a 40 meter (120 foot) tall stupa. Within the temple are carvings along the walls which picture the life of Buddha and many of his incarnations.