Israel is certainly a developed country with just about all the conveniences and attributes that one would expect. And yet, much of the country seems to be depressed, almost backward. Perhaps the worldwide financial crisis is part of the reason, but there are disturbing elements here that lack a simple explanation.

Some of it is surely cultural. For example, as one travels the modern highways in the country, there are Bedouin camps in the hollows of the landscape, just off the road. 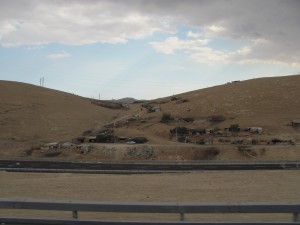 These throwbacks to an earlier time when life here was primarily nomadic are evidence that Israel is a divided country (more about this in a later post).

Trash pick-up is another issue that Israel wrestles with. Although there are obvious efforts to keep the country clean (a problem made more difficult because of the millions of tourists), we found many areas in our travels where the efforts are certainly inadequate, if not a downright failure.

Some areas seem to be booming, with construction cranes everywhere, and other places are run-down, with numerous vacant properties. Perhaps Israel is just experiencing what so much of the rest of the world experiences, or perhaps there are deeper issues which cannot be easily solved by such simple endeavors as building a new landfill, or stimulating construction in depressed sections of the country..