In my estimation, the sculpture of David, by Michelangelo, is the world’s greatest sculpture, a tribute to the artistry, skill, and imagination of Man. Carved from a single piece of marble in the early 16th Century, it has become a symbol of the Renaissance, that period of explosion in the Arts, which signaled the end of the Dark Age for mankind.

The original sculpture can be found in Florence, Italy, in a museum known as the Academia Gallery. 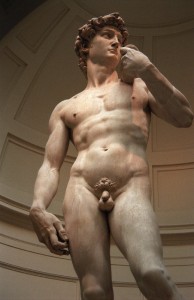 The sculpture portrays the Biblical hero, David, who defeated Goliath with his slingshot. The detail of Michelangelo’s masterpiece is amazing, down to the rippling of his muscles and the veins of his hand. 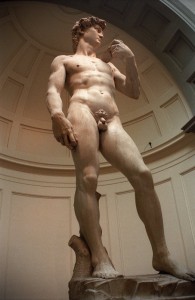 This entry was posted in Photo Albums and tagged Sculpture, World Travel. Bookmark the permalink.