On December 7, 1941, the unthinkable happened. The United States was invaded by a foreign country in a surprise attack that temporarily crippled the US Navy. On this “day of infamy” thousands of American sailors and other military personnel were killed or wounded and all eight (8) of the battleships docked in the harbor were sunk or badly damaged. Almost eleven hundred sailors went down with the USS Arizona.

Visitors to Pearl Harbor today will find a moving memorial to the USS Arizona whose crew still remains on board the sunken ship. A wall lists the men who lost their lives on the ship and the design suggests a significant blow to the spirit of the Nation but the strength of the American people overcomes this blow and results in an ultimate victory. 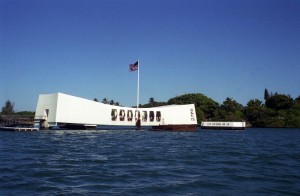 Also in the harbor are markers showing the locations of other battleships at the beginning of the conflict. Nearby is the USS Missouri, the battleship on which the Japanese surrender took place. 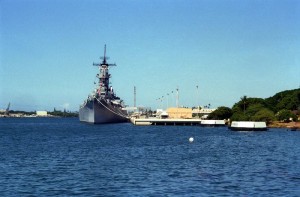