Mount Rushmore National Memorial is truly impressive and inspirational, especially for Americans.  It consists of four (4) American presidents sculpted out of a massive granite cliff. 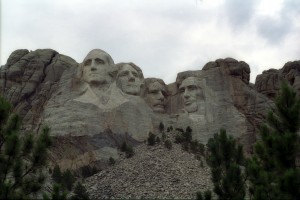 The heads of George Washington, Thomas Jefferson, Abraham Lincoln and Theodore Roosevelt are all 20 meters (60 feet) tall and can be viewed from across a valley. 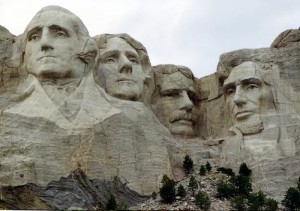 The sculpture is floodlit at night so is particularly beautiful after dark. The Visitor Center offers a film about the carving of the sculptures, and Gutzon Borglum’s workshop, accessible via a trail from the viewing area, displays some of the tools used and models of the construction. It took Borglum and his crew 14 years to complete the project.

A nearby attraction which will surely impress visitors is Badlands National Park which lies just south of Interstate 90, east of Mount Rushmore, in the western part of South Dakota.  It preserves acres and acres of colorful stratified clay deposits.  The area is accessible via the Badlands Loop Road which offers numerous viewpoints to observe the unusual landscape.

The Crazy Horse Memorial on US Route 16/385, just north of Custer, South Dakota, will eventually be the world’s largest sculpture, with a height of 190 meters (562 feet) and a length of 215 meters (641 feet), when it is completed.  Work was begun in 1948.  As of today, the face of the Indian Chief is completed while work on his horse continues.

Custer State Park with its dramatic Needles Highway (State Route 87) is one of the premier state parks in theUnited States.  It offers access to the Black Hills area of South Dakota and its abundant wildlife, including a large herd of bison.

The Needles Highway, a dramatic and interesting scenic drive, is a 22 km (14-mile) trip through unusual granite spires of rock.  There are several narrow tunnels, and hairpin turns so large vehicles must use extreme caution.  Pullouts along the drive provide vistas of the Black Hills. 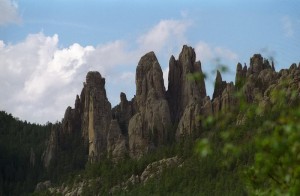