Budapest, Hungary is another former Iron Curtain location which has recently emerged onto the tourist scene. Budapest, like Prague, is split into two sections: Buda, in the hills on the west side of the Danube, and Pest, the relatively flat area on the east side of the river.  Again, the two areas of the city are connected by bridges, the most famous of which is called the Chain Bridge, marked by enormous Lion sculptures. 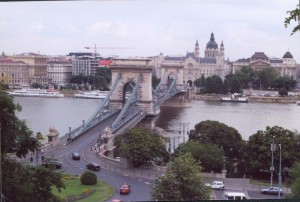 The more interesting section for tourists is the Castle District (in the hills of Buda).  The funicular from the foot of Castle Hill is rather expensive, but worth it to avoid the steep climb (walking back down is not difficult). Buda Castle, which sits ominously above the river is interesting and has beautiful grounds with many flowers and statues. Castle Square and the region around it are great to explore on foot.  Check the crafts and vendors in the area just across the square from the castle (there are many Hungarian crafts at reasonable prices).  Beyond this area is the Fisherman’s Bastion, which abuts St Matthias’ Church and the equestrian statue of St Stephen.  The Fisherman’s Bastion is an elevated walkway with conical towers (there is a charge to walk the walls), which affords a beautiful, panoramic view of the Danube, the city of Pest, and the countryside beyond. 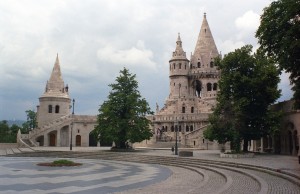 There is also a great view from here of the Hungarian Parliament complex. 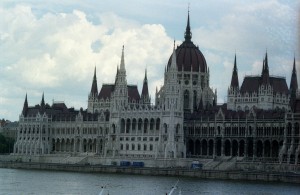 Wander the charming streets of the Castle District before descending the hill to Pest.  Take a detour at the river, turning northward to get a closer view of Parliament, with its neo-gothic silhouette and its exquisite stonework.  On the eastern side of the river, walk along the Vaci Utca, a pedestrian shopping area, that is always crowded with people.

Stop for a beer and a treat just off Castle square at the Cafe Sisi, on Tarnok Utca.  Try the imported German beer, Aldersbacher, and have one of the best desserts in the world, known as Somlo Dumpling (a light, spongy cake with brandy-soaked cherries and walnuts, covered with a rich, dark chocolate sauce)– to die for!!