Chicago, Illinois is a world class city on the banks of Lake Michigan. It has long been associated with working class America because of its stockyards and meat-packing plants. Later, it was known for organized crime with the likes of Al Capone, etc. But Chicago has emerged from it’s sometimes storied past as a beacon of culture and prosperity.  The public places in the city are adorned with fountains, sculptures and other artwork, and the quality of the museums rivals any city in the United States.

Its Skyline, certainly one of the most beautiful in the world, is particularly dramatic because it is fairly compact and rises directly above the sandy beaches of Lake Michigan and Lake Shore Drive.  It is most dramatic from the water, 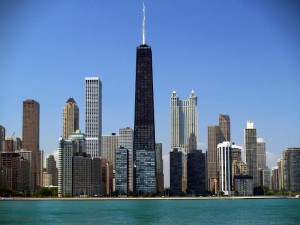 but, nevertheless, beautiful from several piers or land masses which jut out into the lake (in particular, the area beside the Adler Planetarium and the Navy Pier).  The skyline is even more appealing at night when the lights of the buildings complement one another.

The Field Museum of Natural History is one of the world’s best natural history museums. It is located just off Lake Shore Drive, near Grant Park, a lovely setting on the banks of Lake Michigan. The museum contains literally millions of specimens, including the most complete skeleton of Tyrannosaurus Rex, nicknamed “Sue”.  There are sections of the museum devoted to Gems, Native American Cultures, and Ancient Egypt.

Chicago also has great restaurants, probably the result of the many ethnic communities within the city.

For spectacular views of the city and Lake Michigan, take the elevator to the Skydeck of the Sears Tower (now the Willis Tower), which, for several years, was the tallest building in the world (110 stories/1350 feet/450 meters). 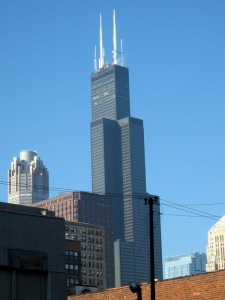 A walking tour of the downtown will always include a stroll down the Magnificent Mile, a high-end shopping area in downtown Chicago, as well as a promenade along the waterfront.  Where else in the world can you see men and women in suits take their lunches across Lake Shore Drive to eat them on the beach with its skyscraper backdrop.

Chicago is also a city which contains many green areas. Particularly popular are Lincoln Park which also houses the city zoo, 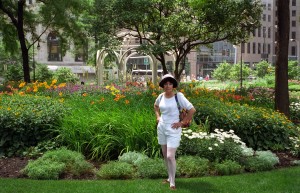 and Millennium Park, right on the lakefront.

Stop by the Water Tower, one of the few buildings to survive Chicago’s devastating fire which began in O’Leary’s barn, in 1871.  Its juxtaposition near numerous skyscrapers is dramatic. 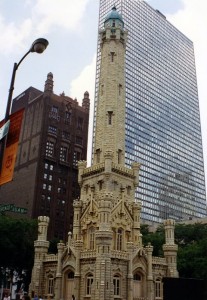