Munich is the capital of Bavaria and one of Germany’s most exciting cities.  It has become world-famous because of its Octoberfest, but it has much more to offer than liters and liters of beer.

The center of activity in the city is the Marienplatz (Mary’s square), a huge area encircled by interesting buildings, including the Neues Rathaus (New Town Hall) which does not appear new at all since it was built in the Gothic style with numerous statues, gargoyles, and towers. 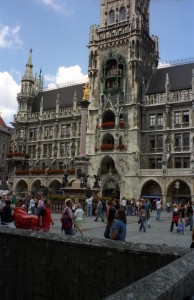 Its tall, main tower contains the famous Glockenspiel which performs several times each day.  These performances last approximately ten minutes and include several sets of figures moving around (there are dancers, knights jousting, and a cock crowing). Find a good viewing location several minutes before the show starts. 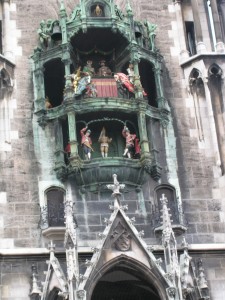 Also on this square is the Altes (old) Rathaus, which is a pretty, Medieval, wooden building with a tower that announces the time of day on the hour and half-hour. 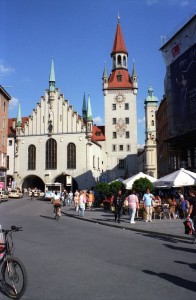 Note also the golden statue of Mary on a column in the center of the square.  Take the time to stop at a tavern with outdoor seating (there are many) to have a brew and people-watch.

Near the Marienplatz is the Frauenkirchen (Mary’s Church), a huge cathedral, surprisingly, made of brick. Its distinctive twin steeples are a symbol of Munich. 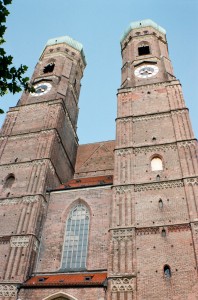 Church of Our Lady

The Residenz served as home to the rulers of Bavaria for over 500 years.  It is a vast complex of buildings and daunting to visit, but there are two requisite places of interest, the Treasury, with its statue of St George Slaying the Dragon, which is gold and studded with numerous gems, and the Cuvillies Theatre, considered Germany’s best example of a tier-boxed opera house in Rococo design.

The Old Town still preserves part of its walls and several medieval gates. 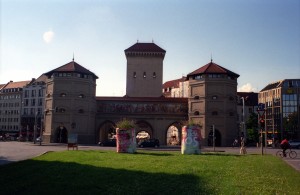 Schloss Nymphenburg was the summer palace of the Wittelsbachs, the ruling family of Bavaria for many years.  It is located on the fringe of Munich, far from the medieval city center, so it is best visited by public transport, the U-bahn.  The palace grounds are vast, so it is quite a walk from the U-bahn station to the palace complex.  The part of the main building which can be visited is fairly compact, and offers the typical palace accoutrements, elaborate decorations and wall hangings.  Stroll around the formal gardens behind the palace which offer some serenity and solitude. 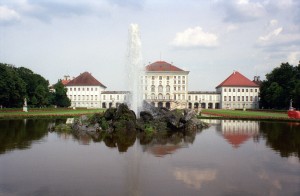 The Deutches Museum, in Munich, is the world’s premier technology and science museum.  It is much too large and diverse to see in one visit, so the visitor is wise to prioritize and plot a strategy based on the amount of time available, then, perhaps, return at a later date to see other parts of the museum.  Much of the museum is interactive, which adds to the enjoyment.  Of note is the Aeronautics Exhibit, with a huge display of flying machines, Chemistry, which allows the visitor to mix chemicals together to see what results, as well as Food Technology, Toys, and Musical Instruments.   Depending on interest, everyone will find an area to spend time in and be fascinated with. 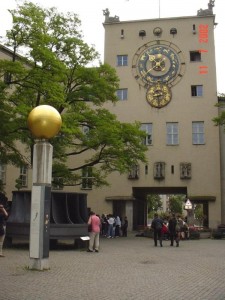 The world famous Hofbrauhaus, the most well-known beer garden in the world is a must stop for visitors to Munich.  The food is only so-so, but it is a thrill to be served here, especially with an “oom-pah” band playing in the background..