Niagara Falls, which straddles the border between upstate New York (USA) and Ontario, Canada, has been a top tourist destination for almost two (2) centuries.  The American Falls are slightly higher, 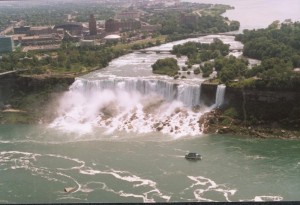 though not as wide as the Canadian Horseshoe Falls, named for their curved shape. 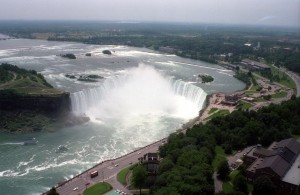 The area is extremely accessible, because it is fairly close to several major population centers (Toronto, Canada and Buffalo, Syracuse, and Rochester, New York).

Niagara Falls, New York, is a bit honky-tonk, but it still commands respect because it has survived so many years as a destination.  Obviously, the beauty and romance associated with Niagara Falls has transcended the mundane reality and commercialism of the nearby area.  The sheer immensity of the falls, millions of gallons of water pouring over a precipice and dropping 60 meters (180 feet) makes it a spectacular sight, but when all of the accoutrements are considered, there is much to do which warrants a stay of two or three days.

Be sure to see the falls at night — they are lit with colored lights for several hours after sundown and present a totally different ambience. 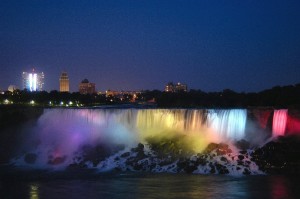 Take a walk along the falls, particularly to Goat Island, during the day to view them from various angles

One of the best activities while in the area is a Maid-of-the-Mist boat ride for an up-close view of the falls from below (even though the thought of riding in a crowded boat with ugly rain gear on, into an area of dangerous swirling, fast-moving water sounds a bit bizarre, it is an obligatory experience for any self-respecting tourist).

1. Even though the food is extremely average and over-priced, the view of Niagara Falls from the Skylon Tower’s revolving restaurant on the Canadian side is positively spectacular.

2. The “Cave of the Winds” adventure (USA) or “Table Rock Scenic Tunnels” (Canada) offer a different perspective from below the falls (rain gear is issued for both attractions and participants will get wet!).

3. The Niagara Falls IMAX Theatre, on the Canadian side, provides a film which explores the history of the falls, especially showcasing the daredevils who, over the years, have challenged Niagara..