The capital of Oklahoma is short on attractions, but there are a few which will capture the imagination and the emotion of the traveler. The National Cowboy Hall of Fame and Western Heritage Center, showcases the era of westward expansion in America, and some of its major characters. American Indian life is also exhibited, as well as thousands of artifacts and memorabilia. Highlights include the Rodeo Hall of Fame, the Western Art Gallery, which includes the work of famous American artists, such as Frederic Remington, and the Visions of the West gallery, which includes an authentic replica of a street in the Old West. My favorite piece of art is End of the Trail, a huge scupture which graces the foyer of the museum. 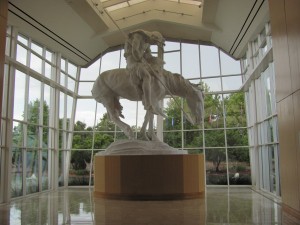 End of the Trail

Perhaps even more significant is the Oklahoma City National Memorial, which recalls the tragic events of April 19, 1995, when a disgruntled American soldier bombed the Federal Building here, killing 168 innocent people. The memorial is composed of several sections: the Empty Chairs, one for each of the dead, which line the reflecting pool, 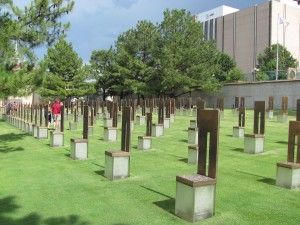 the gates, 9:01 and 9:03 representing the horrendous 2 minutes during which the explosion rocked the Federal Building and caused its major destruction.

the Survivor’s Tree which symbolizes the fact that, despite the carnage, life goes on for many of those affected, 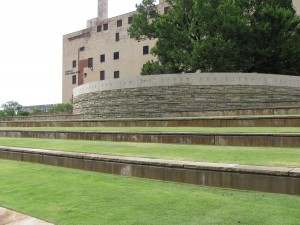 and the Rescuer’s Orchard, a tribute to those who risked their lives to help and comfort the wounded and other victims. 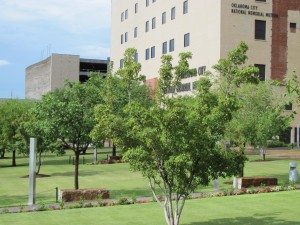 The overall experience is one of outrage, empathy, and hope.