Sequoia and Kings Canyon National Parks are adjoining parks which feature the world’s largest tree, the giant Sequoia. Sequoias in the park reach to over 100 meters (300 feet) tall, with trunk diameters over 10 m (30 feet). The “Giant Forest” is the largest grove of sequoias in the parks and houses the General Sherman Tree, the largest known sequoia, over 2,000 years old, which is almost 100 meters (275 feet) tall, with a circumference of 35 m (103 feet). 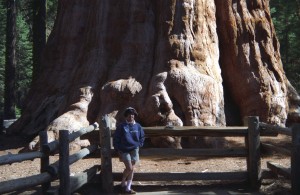 Lee with the General Sherman Tree

Stop first at the Visitor Center for a map and information.  There are numerous hiking trails and scenic roads throughout the parks.

The most popular drive in the area is the General’s Highway, a scenic route which winds through the parks and provides access to the major attractions.

In Kings Canyon, the featured attraction is the General Grant Tree, slightly smaller than Sherman but equally impressive. 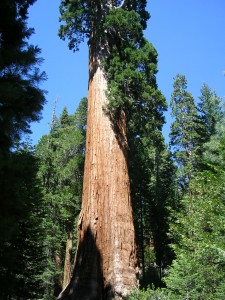