The historic city of Toledo is, deservedly, a World Heritage Site, like many in Spain, because it is a walled, medieval city in which noteworthy treasures abound. From the walls and city gates

to the many houses of worship to its prominent Alcazar (castle) and the narrow, winding streets that connect all the attractions, there is much to occupy the tourist here.

The Catedral is easily the most magnificent structure in the city.  From the Reredos of the high altar, to the Choir, to the Transparante behind the altar — all are exquisite!  Unfortunately no pictures are allowed inside. 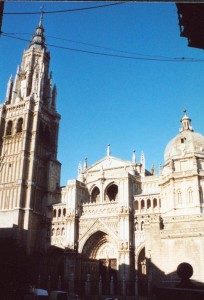 The Toledo Alcazar sits at the highest point of the city, with a commanding view of the countryside.  Many of its displays and rooms focus on the siege of the castle during Spain’s Civil War in 1936.  The residents resisted for many, many days.  There is  also a military museum which possesses many types of weaponry as well as miniature battle scenes and uniforms. 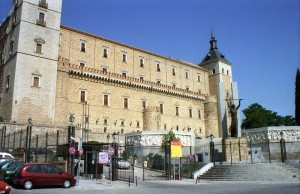 El Greco, the Greek who became one of Spain’s most famous artists, is revered in Toledo.  His house and museum are open to the public.

1. Visit the Iglesia de Santo Tome’ to view El Greco’s The Burial of Count Orgasz, one of his most famous paintings.

2.  Take a short ride out of the city to the Parador Nacional de Conde Orgaz to get a view of the city made famous in El Greco’s painting, View of Toledo. 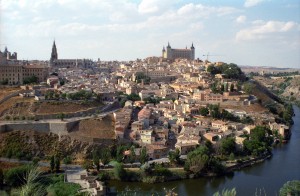