Washington, DC is the requisite destination for all patriotic Americans.  It also has much appeal for the world traveler because of its wonderful museums and beautiful neo-classic architecture, as well as the striking memorials that honor some of the icons of American and world history. Perhaps more important, almost all the attractions of the city are free, a rare occurrence in these times.

The city is laid out as a grid with four zones (NE, NW, SE, SW). The numeric streets run north-south and begin at First Street, at the US Capitol Building.  The east-west running alphabetical-named streets begin in either direction from the Mall.  The avenues are named for the states of the union and run diagonally, e.g. the White House is on Pennsylvania Avenue.

The primary tourist area is almost entirely within a few blocks of the Mall (a broad, park-like, grassy area between Constitution Ave and Independence Ave, running from the Capitol Building to the Lincoln Memorial).  Also within the Mall are the many buildings of the Smithsonian, the Washington Monument (which dominates the skyline), and most of the war memorials.  The Mall also allows easy access to the White House, the Jefferson Memorial, the tidal basin, and west to the Arlington Memorial Cemetery.

The Smithsonian Museum, the world’s largest museum, occupies numerous buildings on or near the National Mall in Washington, DC.  There is also an annex to the Air and Space Museum at Dulles Airport, about 30 miles west of the city and two galleries in New York City. The Smithsonian also includes the National Zoo, located on the outskirts of the city.

The National Air and Space Museum displays the history of flight through a variety of exhibits and experiences.

The National Museum of Natural History houses an immense collection of animals from around the world.

The National Museum of American History has a huge collection of artifacts and memorabilia representing American culture, past and present

The Washington Monument is a tall (over 550 feet/180 meters), obelisk which occupies the center of the Mall. Visitors can ride an elevator to an observation area which provides spectacular views of the city and the other major memorials. Be prepared to wait in line. 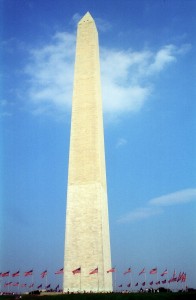 The Lincoln Memorial, at the western end of the Mall, is a moving tribute to one of America’s most beloved presidents. The huge statue of a seated Lincoln commands respect and admiration. On the walls flanking the statue are etched the words of two of Lincoln’s greatest speeches. 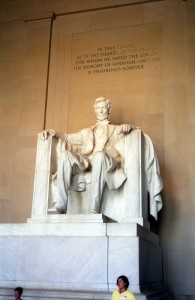 In between Washington and Lincoln is one of the newest memorials on the Mall. The World War II Memorial remembers one of the world’s darkest times. America lost more young men and women in this war than in any other in its history. 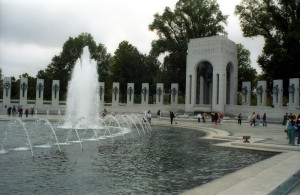 The Jefferson Memorial is located on the tidal basin, a large lake connected to the Potomac River. The building which houses the president’s statue looks like it would be at home in ancient Greece or Rome, and has stairs which lead to the water. 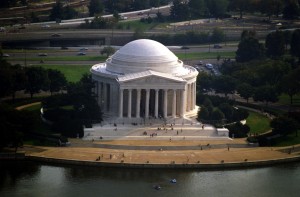 The most popular of the war memorials is the famous Vietnam Veterans Memorial “wall” which occupies a spot between the Lincoln and Washington memorials, near the reflecting pool. It is inscribed with the names of all soldiers killed or missing, in chronological order. 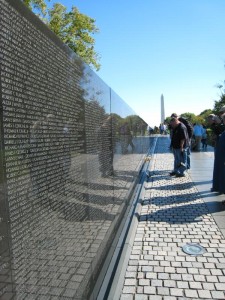 Other attractions in the city, besides those already mentioned include the United States Holocaust Memorial, an extremely moving tribute to those who lost their lives during the exterminations which were perpetrated by Nazi Germany in the years before and throughout World War II. A multitude of media are used in the dramatic and sometimes disturbing presentations. Reservations must be made in advance.

The International Spy Museum, near Chinatown, takes the visitor on an interesting and informative tour of the gadgets and methods used in international intrigue and eavesdropping. There are extensive exhibits which focus on some of the most famous or infamous spies in history.

Explorer’s Hall is an exhibit, offered by the National Geographic Society, which displays, often interactively, some of the famous expeditions conducted by the society. It is a great place to bring kids and fascinating for adults as well.

There are too many other sights to mention them all, but Washington, DC must be savored with several visits over time. Like any great museum, the city cannot be seen all at once.

Other sights in the vicinity of the city of Washington DC include Mount Vernon, George Washington’s home, the quaint old town of Alexandria, Virginia, and the Steven F Udvar-Hazy Center, an annex to the National Air and Space Museum of the Smithsonian, at the Dulles Airport in Chantilly,Virginia.

Mount Vernon, George Washington’s estate on the Potomac, near Washington, D.C., is fine example of wealthy colonial life.  Washington considered himself a farmer at heart, and only reluctantly left his plantation to serve his country as its first president.  He retreated to Mount Vernon whenever possible and retired from public life there after his second term.  The mansion and grounds have been lovingly restored and contain period furnishings, as well as Washingtonian memorabilia.  Guided tours of the house and buildings are offered frequently. 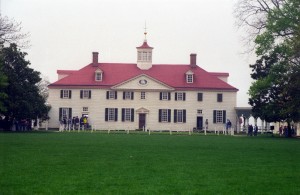 Also in nearby Virginia, just across the Francis Scott Key Bridge, behind the Lincoln Memorial, is one of the most moving spectacles in the entire area. Arlington National Cemetery is the largest and most prestigious military cemetery in the country. It is the final resting place of thousands of the nation’s best and brightest. Just walking through the grounds is emotional enough, especially if family members or friends are interred here. However, the Changing of the Guard Ceremony at the Tomb of the Unknown Soldier is particularly symbolic and spiritual. The ritual takes place every half hour during the summer and every hour during the remainder of the year. 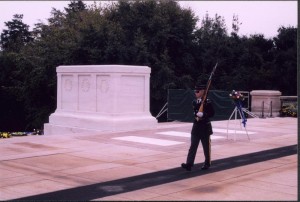 Also worthwhile on a visit to the cemetery are stops at the John F Kennedy Gravesite where a perpetual flame pays tribute to one of America’s most beloved presidents and Arlington House, the Southern mansion which dominates the highest part of the cemetery, which was the former residence of General Robert E Lee, one of the country’s most celebrated generals.

1.  Cross Constitution Ave in the vicinity of the Vietnam War Memorial to find the Einstein Memorial at the National Academy of Sciences Building.  Kids and adults can climb all over the statue which depicts Einstein seated on a low wall. 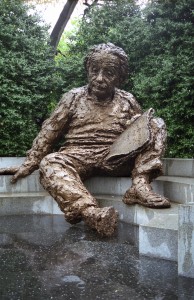 2.  Pass the Franklin Roosevelt Memorial into the tidal basin to find an unusual sculpture called “The Awakening”.  Once again, kids will love it since they can run around and climb all over the sculpture. 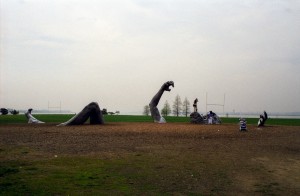 3.  The Library of Congress, Jefferson Building has an original “Gutenberg Bible” on display.

4.  Check out Game Fish in the Renwick Gallery, a small crafts museum on Pennsylvania Ave, near the White House, for a nostalgic look at some true “Americana”. Adults, as well as kids, will be fascinated! 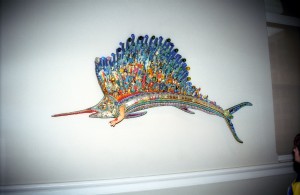 5.  While at Mount Vernon, stroll around the grounds after the tour to appreciate the view and the many innovations which Washington incorporated into his farm..