We arrived in Copenhagen this morning where we will disembark and spend several days onshore. This is the last of our Scandinavian capitals and we hope that it will be “Wonderful, wonderful,” as the song and movie states.

We arrived at our hotel (Radisson Blu Royal) just before noon and were lucky enough to be able to move in immediately. After unpacking we headed for the Tourist Information Office for a map and some information. We decided to do their suggested walking tour which they assured us would only take about 3 hours from start to finish. It took us about 4 1/2 hours with a few stops along the way for lunch, ice cream, and toilets. We were completely exhausted when we returned but we saw most of the necessary sights which I will now chronicle.

First stop on the walking tour was City Hall, a huge brick structure very close to our hotel. 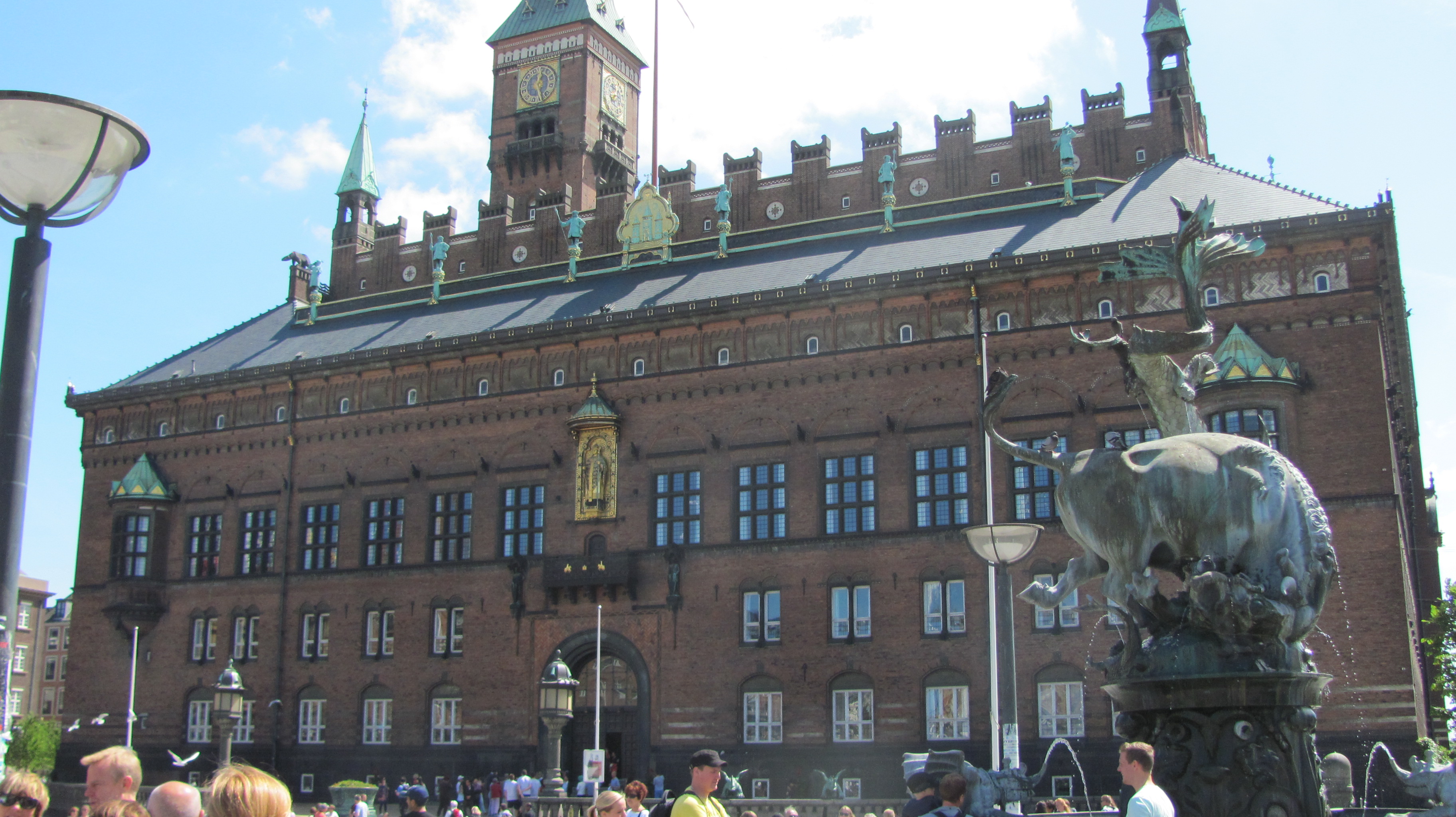 We then walked briefly along the Stroget, one of the world’s longest pedestrian streets, before detouring to see the Cathedral. 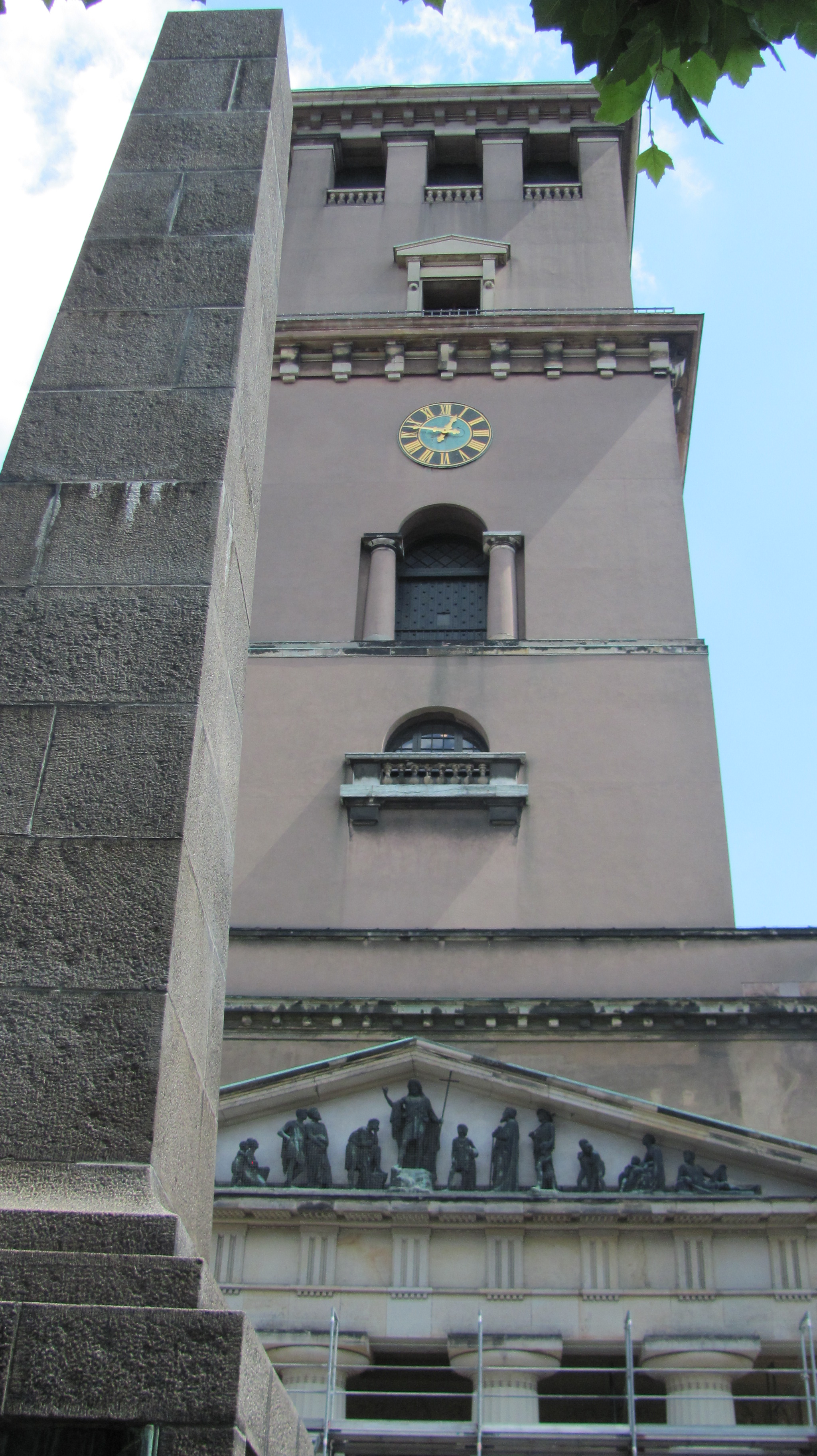 A bit further along is the Round Tower, 111 feet high, which can be ascended for great views. The ascent is via a wide ramp. Supposedly, Peter the Great rode up the tower on horseback followed by the Czarina in a carriage. 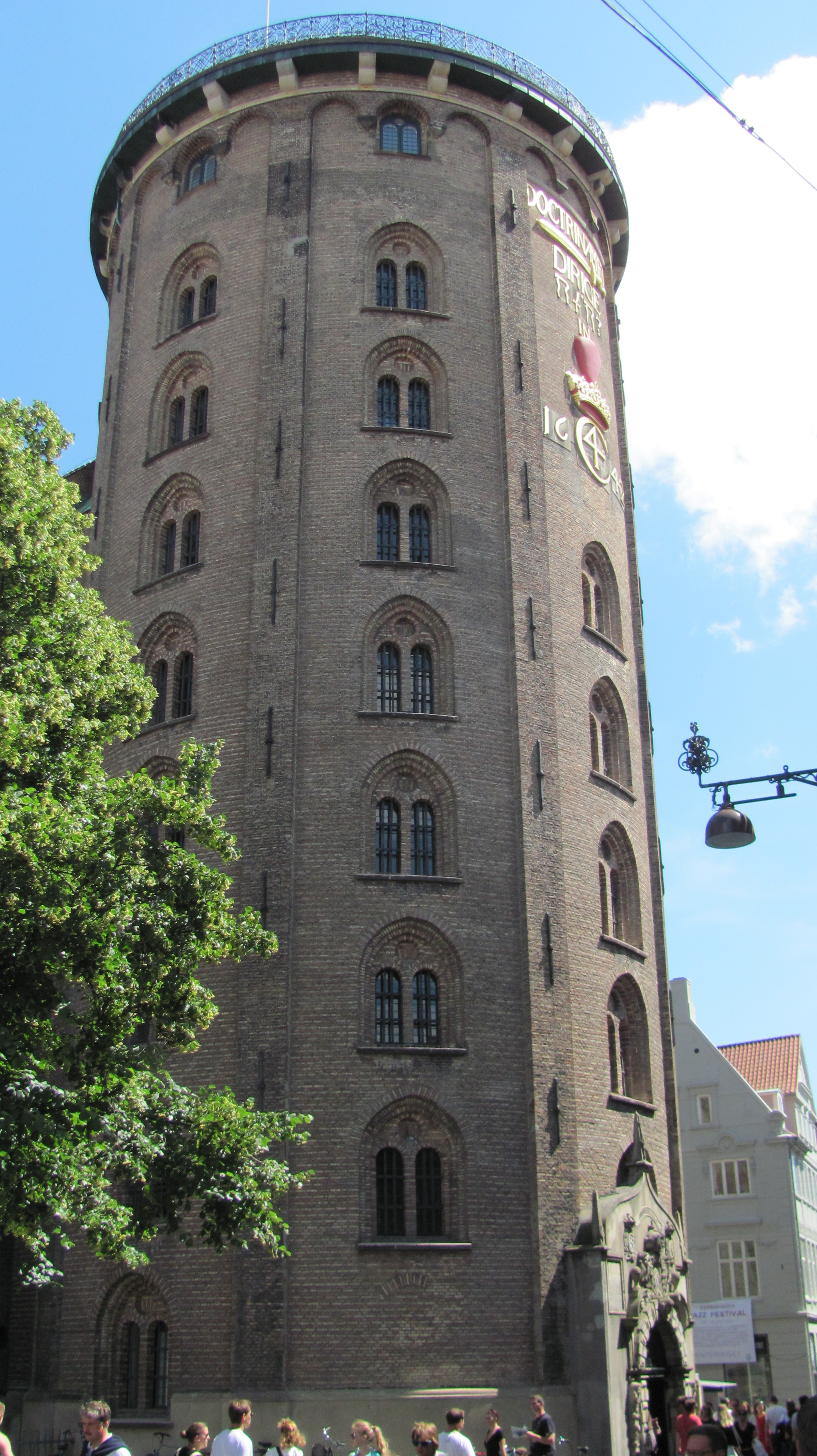 After strolling through the very pleasant King’s Garden, we came to Rosenborg Castle, once a royal residence but now a museum. 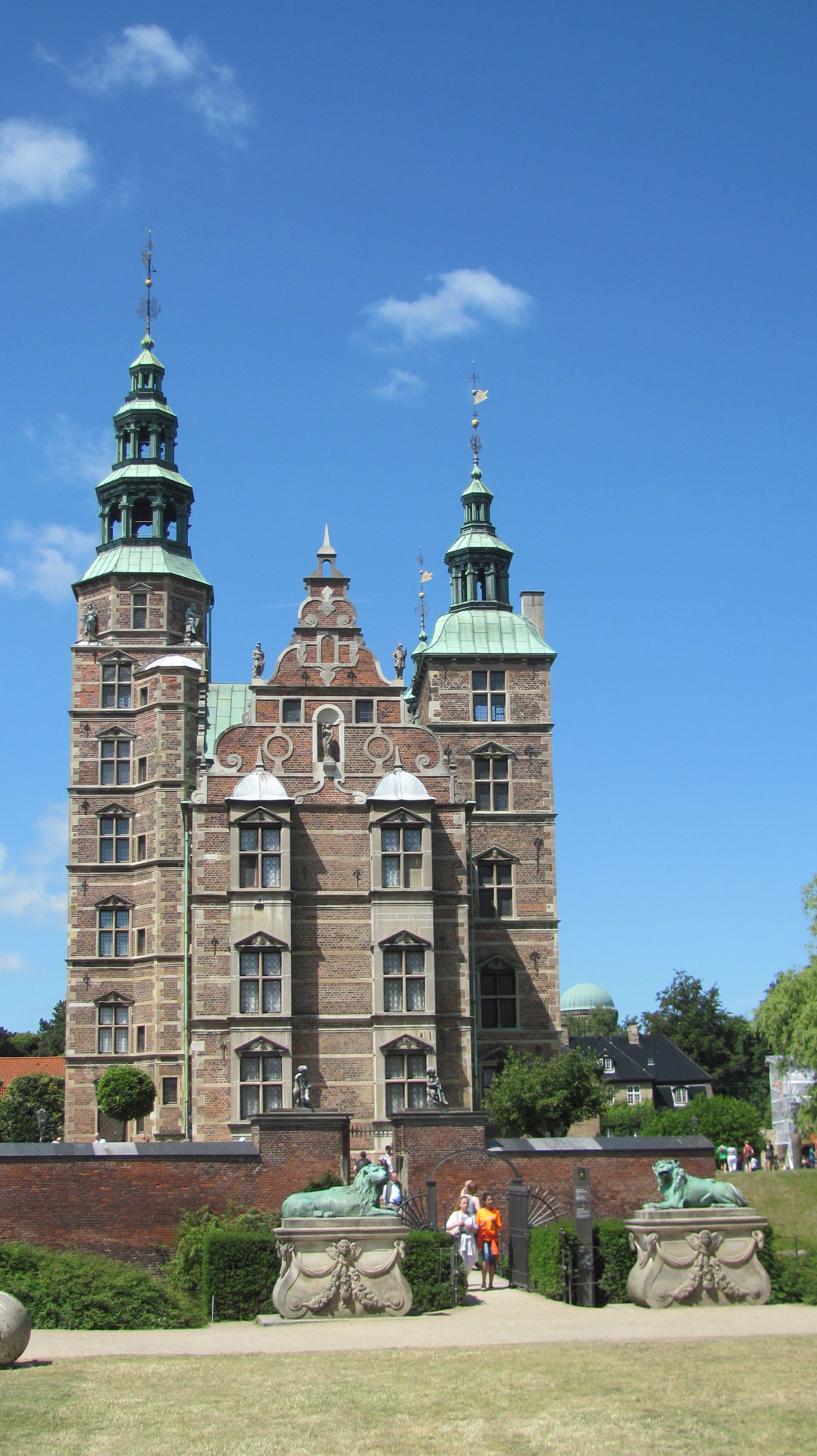 Next on the agenda was King’s Square, the largest square in the city. The most impressive of the massive and elegant buildings on the square is the Royal Theater, a neo-Renaissance structure. 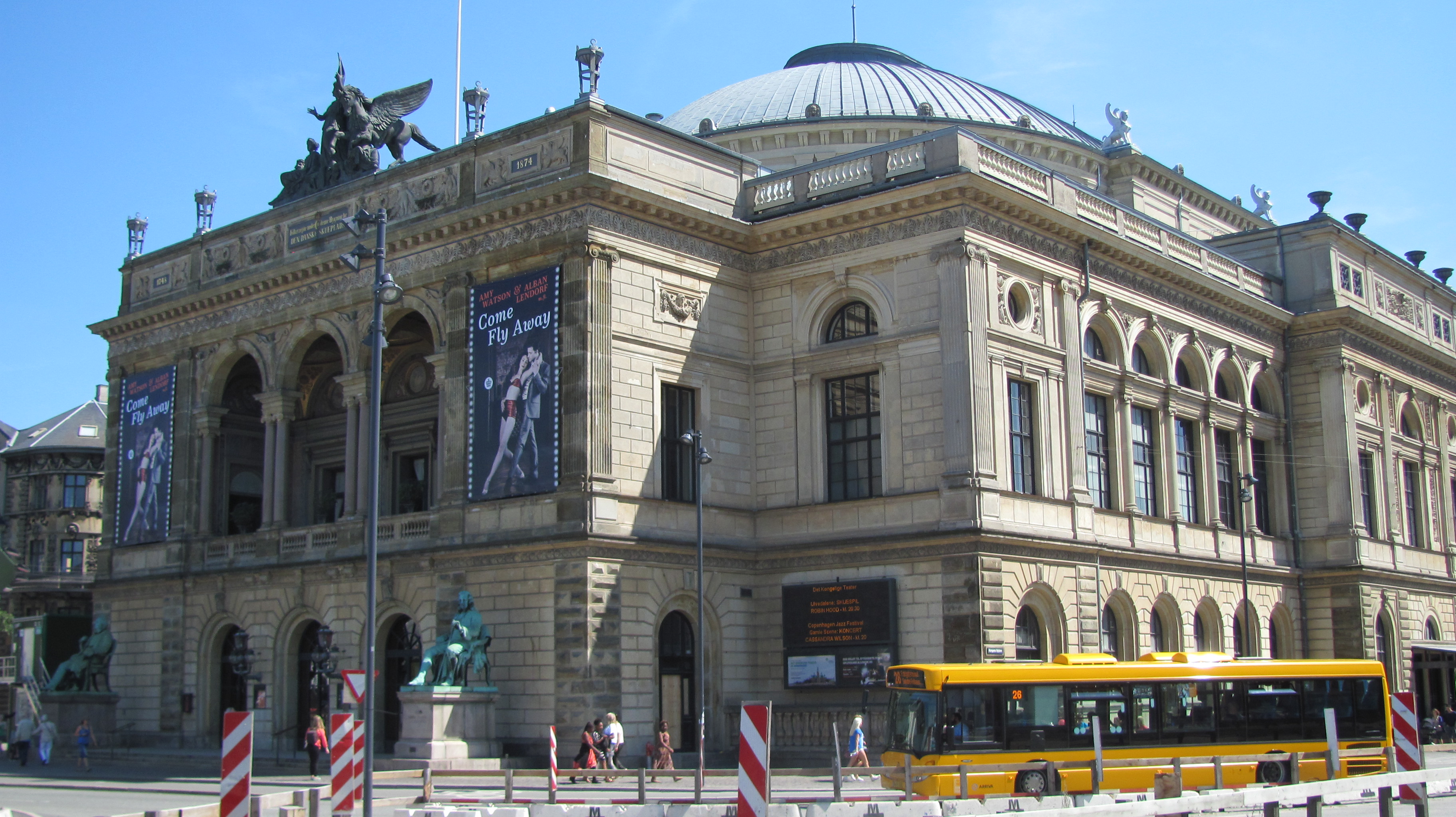 From here we entered the most lively and most charming section of the city. Nyhavn, or New Harbor, was once the seedy red-light district where sailors on shore leave hung out. Now it is the most popular spot in Copenhagen to sit and sip a beer, watching the world go by. This area is quintessential Copenhagen. 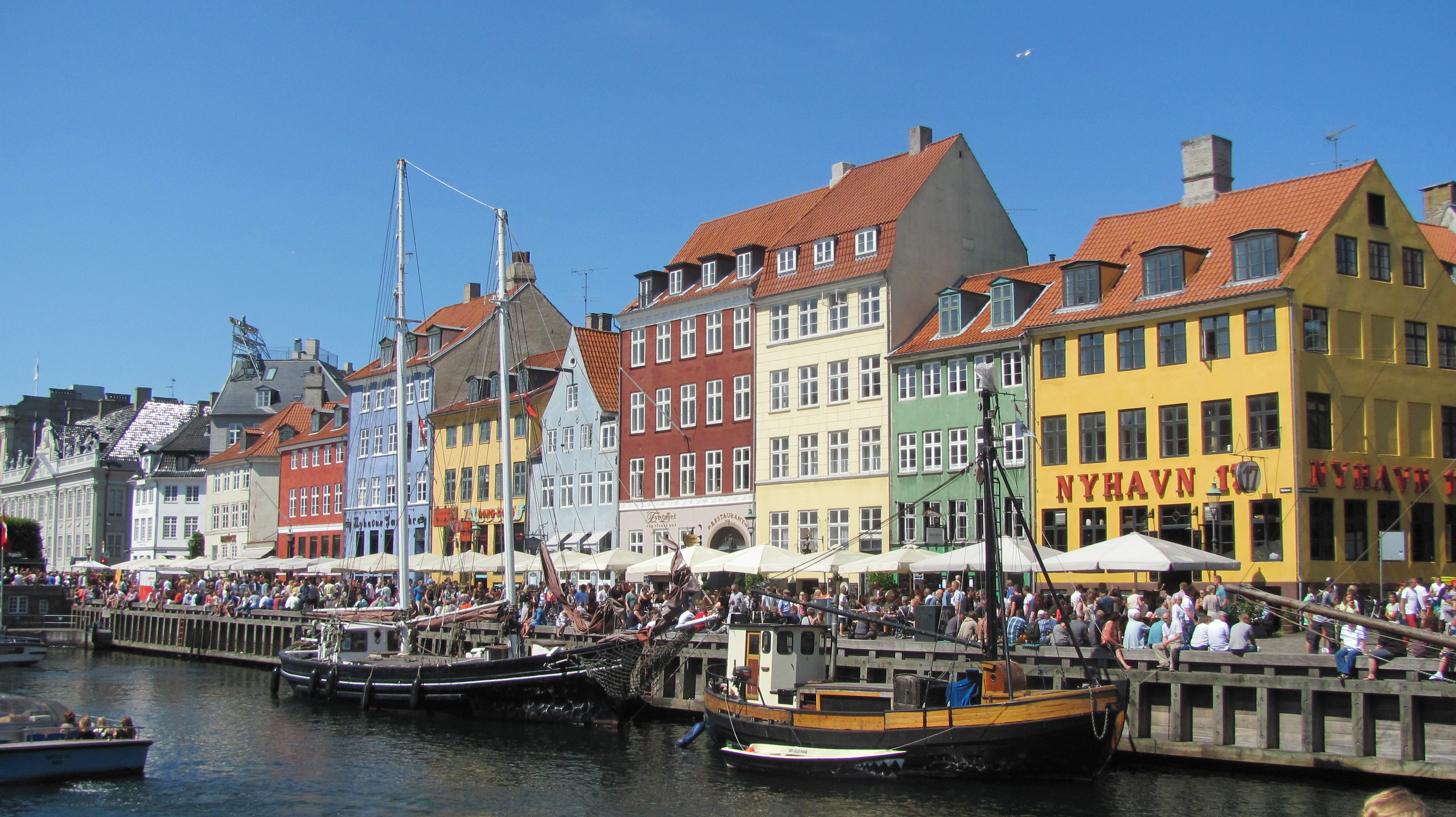 The end of the canal offers an excellent viewpoint to observe Copenhagen’s newest addition, its modern Opera House, designed and completed in 2005 by Henning Larsen. Much of the building is below ground. 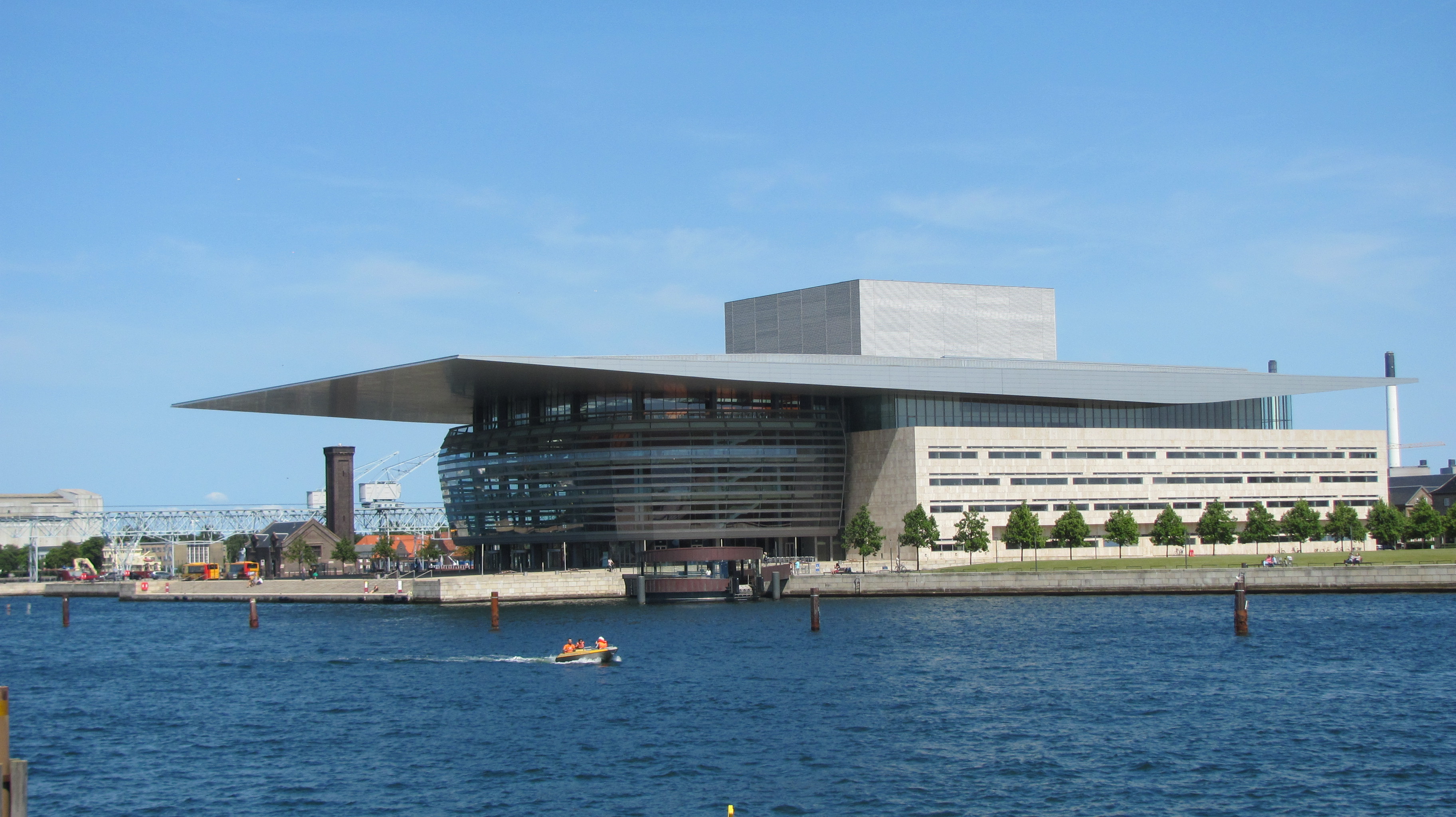 Nearby is the current royal residence, Amalienborg Palace, actually a complex of four (4) identical French-style Rococo mansions with an equestrian statue of Frederick V in the midde. 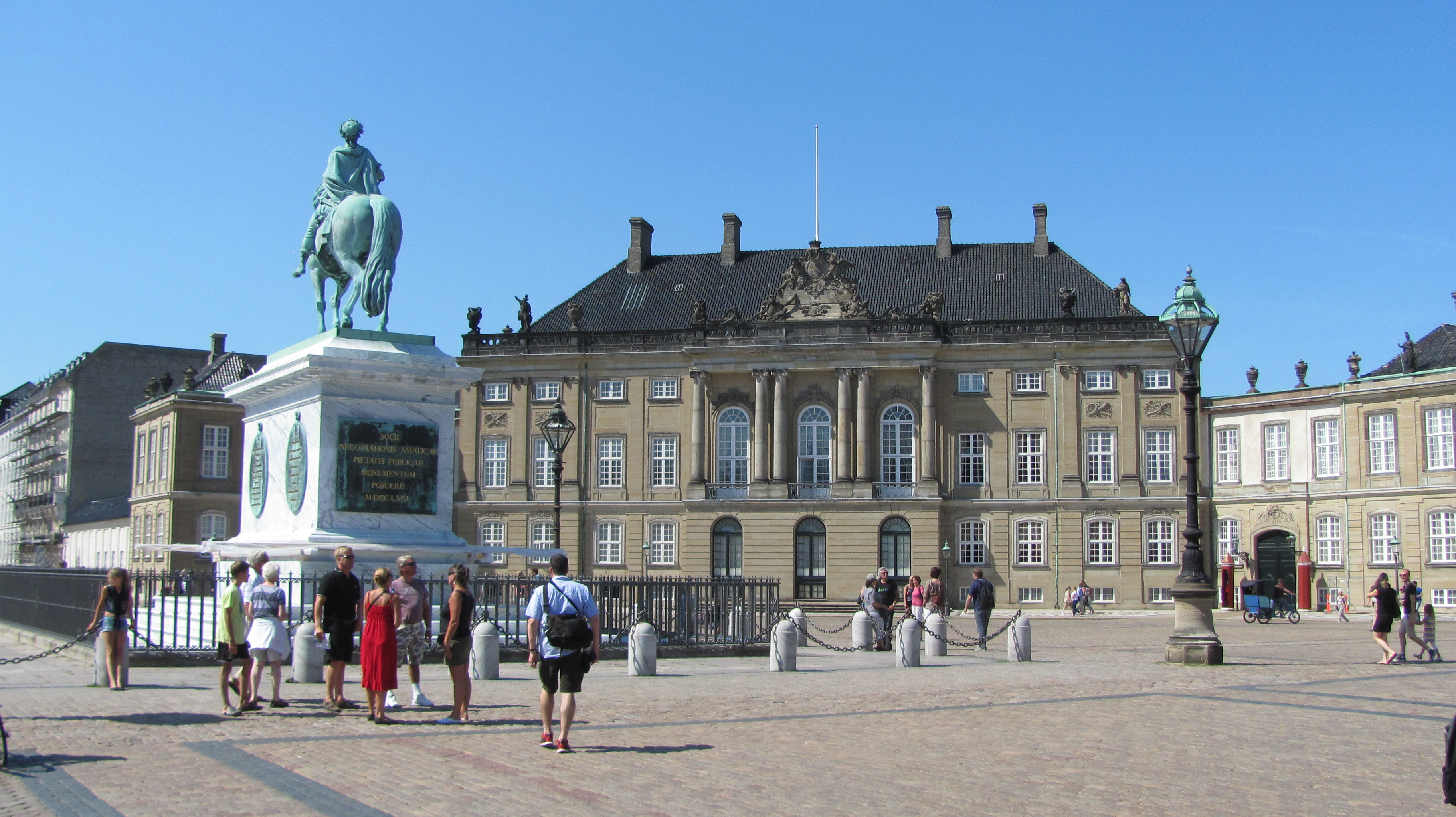 The statue faces Frederick’s Church, better known as the Marble Church. This church took 150 years to build because they were using very expensive Norwegian Marble. Finally in the late 19th century they decided to finish the church with Danish Marble. It has one of the largest domes in Europe. 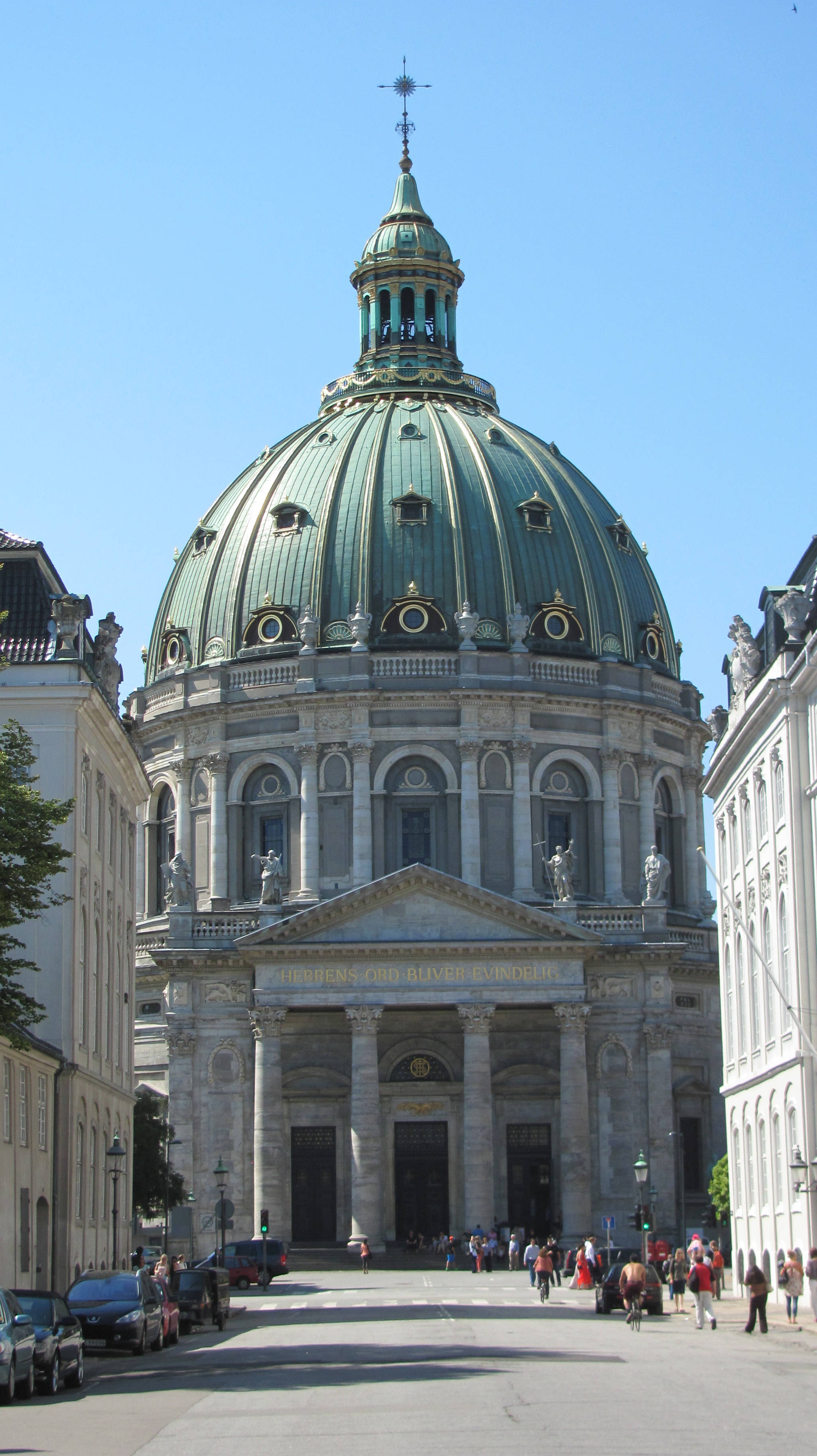 As we walked along the harbor we came to the largest fountain in Copenhagen, the Gefion Fountain. Legend says that the Danish island of Zealand (on which Copenhagen sits) was brought to Denmark by Gefion. She asked Odin for some land and she was promised as much of Sweden as she could plow in one day. Since she had four (4) sons, she changed them into oxen and plowed a huge piece of land which now contains Copenhagen. The fountain shows Gefion spurring her four oxen to plow. 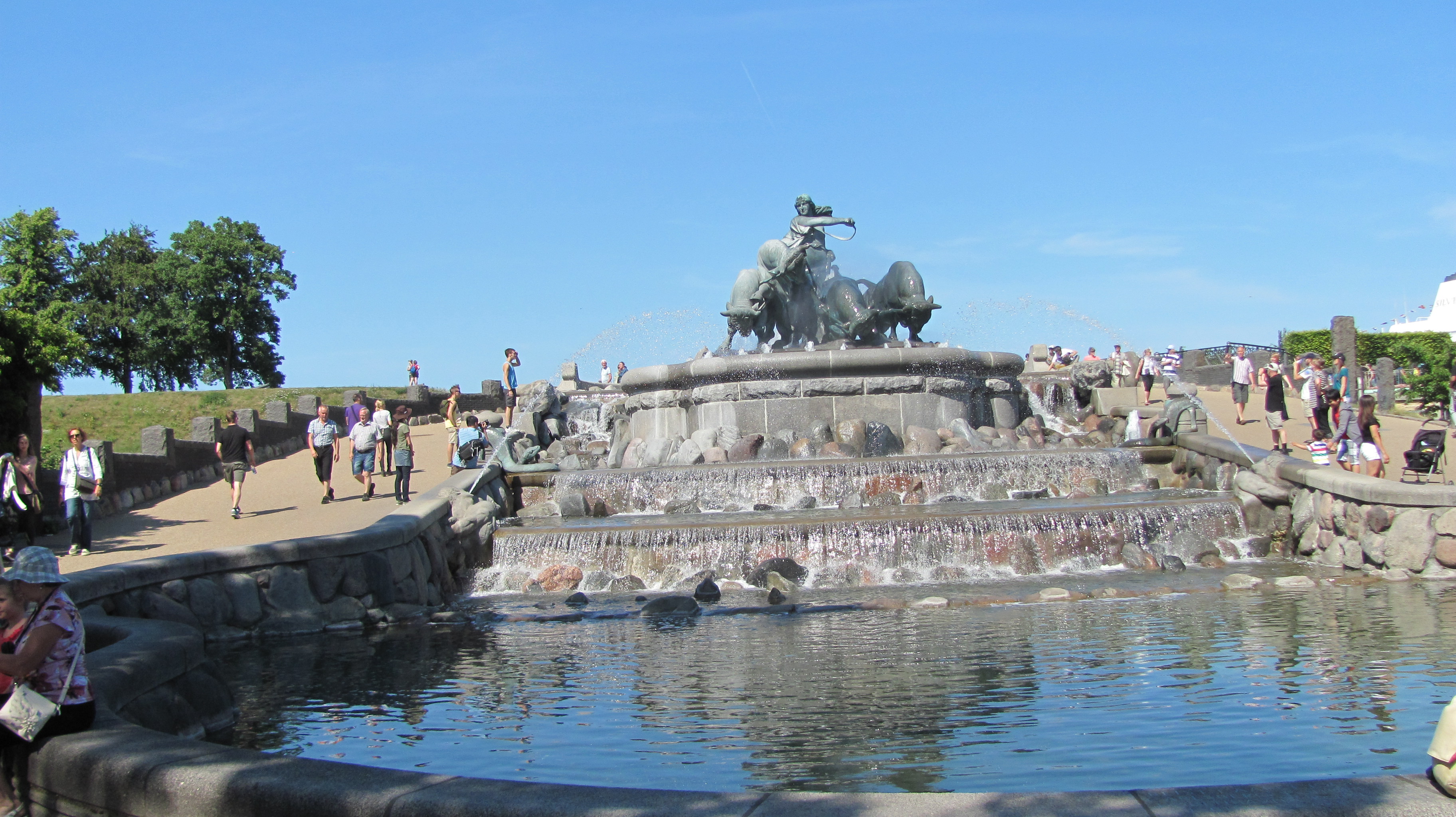 A bit further along the harbor is the symbol of Copenhagen, The Little Mermaid, a character from the story written by native son Hans Christian Andersen. The statue is quite small but is beloved by the citizens and very popular with tourists. 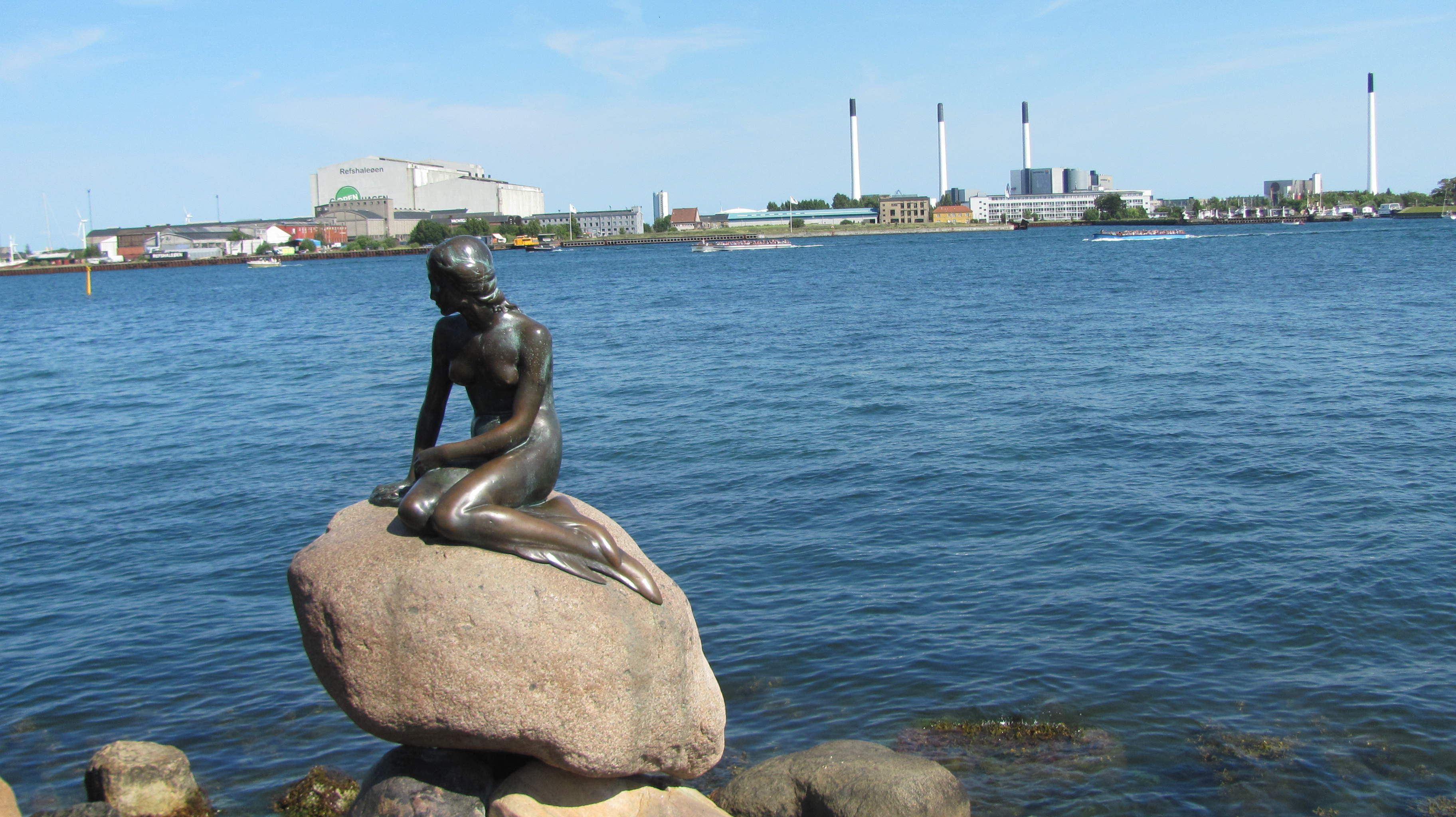 On the way back to our hotel we walked the entire length of the Stroget. It is so crowded that it resembles walking along Times Square in New York City. A noteworthy fountain sits near the middle of Stroget. The Caritas Fountain was rather controversial when first unveiled but now has become a popular gathering place. 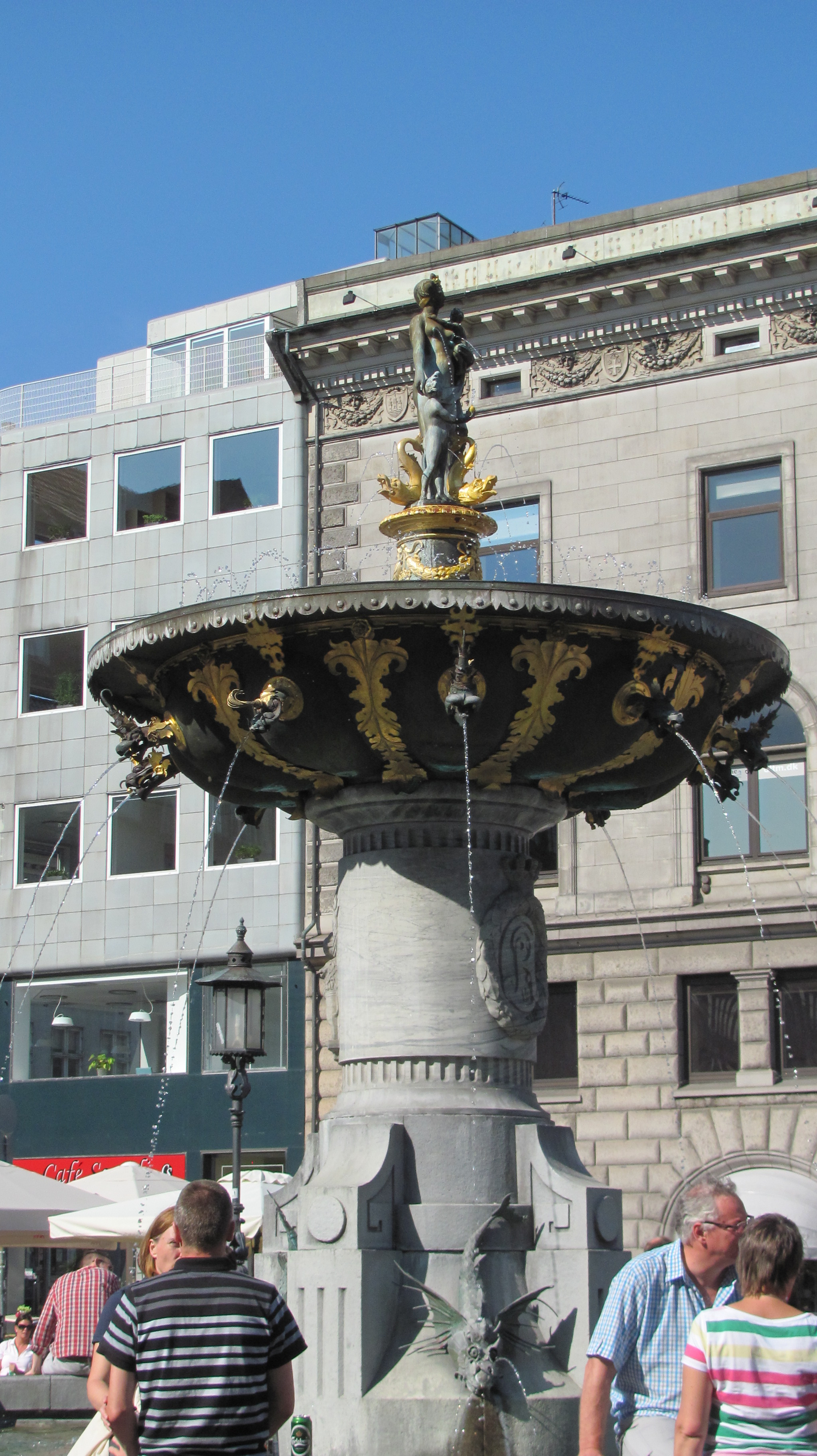