Since we managed to see most of the city sights on our first day walk, our second day in Copenhagen was spent primarily at Tivoli Gardens, the ancient amusement park that is so beloved by the Danish people. Because the park does not open early, however, we did have time to cover a section of Copenhagen that we ignored on the first day.

Most of the government buildings associated with the capital of Denmark are located east of City Hall, on Slotsholmen Island. Once again, we began at City Hall and walked eastward on Lavandelstraede, checking our the Lur Blowers Column in the process. The Lur is an ancient musical instrument with a sound similar to our trombone. The Lur was blown to summon men to arms. 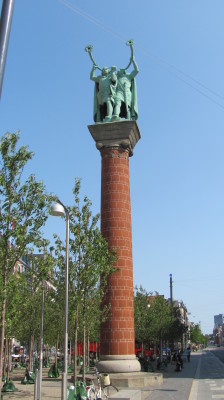 During this part of our walk, we strolled down one of the oldest streets in Copenhagen, Magstraede, with vintage Danish architecture. 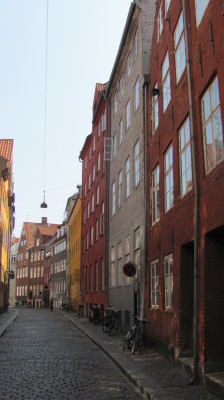 We reached Christiansborg Palace, once the residence of the Royal Family, but now the location of the Danish Parliament and Courts. 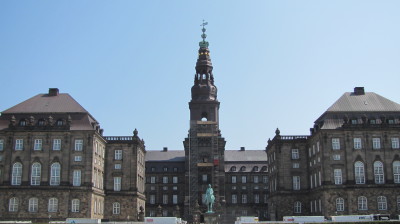 Nearby is the Old Stock Exchange (Borsen), a huge building with very unusual architecture. 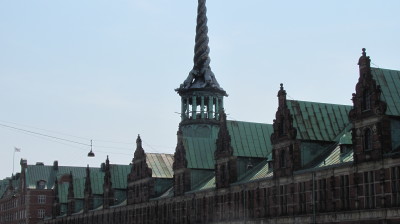 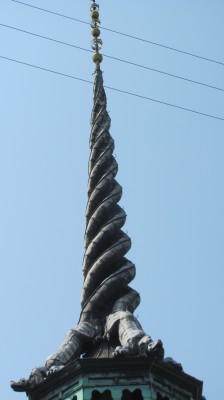 From here, we walked to Nyhavn to get another flavor for this spot and its magnetism. Then we returned to City Hall via the Stroget. Along the way we encountered two (2) interesting fountains. One is the Caritas Fountain, which shows a goddess with water flowing from her nipples onto young boys who are urinating water into the center of the fountain. This fountain was fairly controversial when it was revealed.

In another square along the Stroget stands the Stork Fountain, an important symbol of fertility in the city. Midwives who have just graduated have danced around the fountain since 1950. 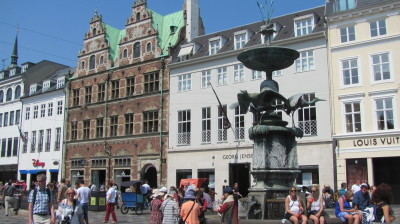 The remainder of our time was spent in Tivoli. The fairly steep admission fee (17 Euros) only allows access to the park. Rides, games, and other activities are separate fees. We found Tivoli delightful, and well worth the admission. 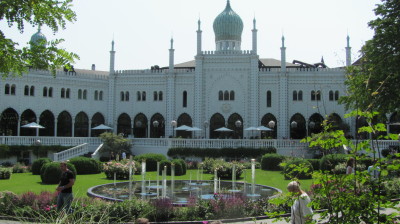 There are flower gardens everywhere, making any stroll through the park pleasant. 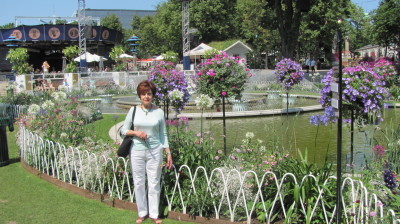 Lee with Flowers in Tivoli

At night the entire scene is lighted with thousands of lanterns and small lights. We left before things got very dark but I’m sure that it became totally enchanting. 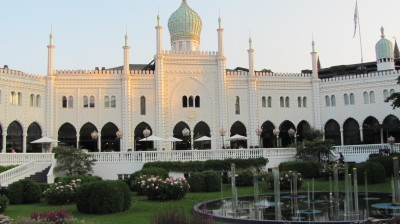