All of this assemblage of the top 40 tourist attractions on the Iberian Peninsula are found in Spain.

19. Cuenca, Spain — This town is famous for its “hanging houses,” residences built on a precipitous cliff so that they seem to “hang” in the air.

18. Guggenheim Museum, Bilbao, Spain — Designed by noted architect Frank Gehry, this modernistic building is a showplace in itself. The museum also holds some fabulous Art.

17. Salamanca, Spain — This enchanting town northwest of Madrid has one of Spain’s most beautiful and popular squares. Salamanca is also the home of Spain’s oldest and most prestigious university. 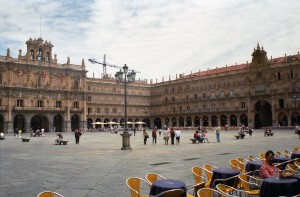 16. Pamplona, Spain — Forever linked to Hemingway and to its annual festival, the “Running of the Bulls,” Pamplona is positively filled with tourists during the San Fermin feast in early July.