This was our last port of call, and the weather was the most spectacular of the cruise. Up to now we have had decent weather, but every day started with showers and some days remained cloudy. However, today was fantastic from start to finish. Coincidentally this was our only day at a beach. Our excursion in Grand Cayman consisted of an island tour (okay but nothing great since the island has little to offer in the way of sights) and a beach break at one of the Grand Cayman’s best beaches, Tiki Beach, a section of the famous Seven-Mile Beach (actually 5.5 miles).

We stopped first at Camana Bay, a self-contained resort just northeast of George Town. It would probably be a nice place to spend a few days but it had little to offer us. We climbed the tower, whose claims to fame are a series of wonderful mosaics depicting the life of a typical Grand Cayman coral reef, and a 75-foot tower which claims to be the highest point on the island (views are un-spectacular). 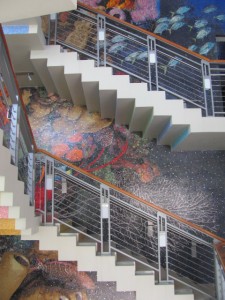 We stopped at a Rum Cake Factory where we sampled and bought some rum cakes and took a few pictures with their pirate figures outside. 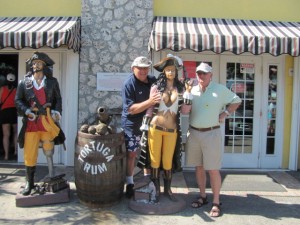 We also went to Hell! Hell is a village on the island, named for a coral formation which is dark and forbidding. A gift shop here has capitalized on the idea; visitors can send a postcard from Hell. 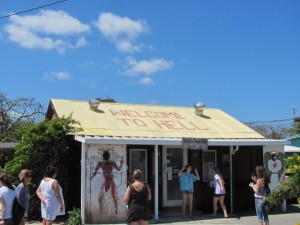 The remainder of our excursion was spent on Tiki Beach, one of the finest beaches in the Caribbean. It was crowded but well worth the time since we have not done any beaches on this entire trip. 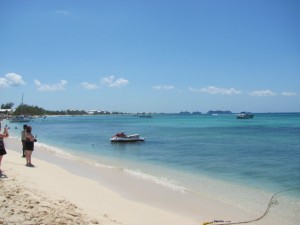 When I returned to George Town, I tested my Walking Tour of George Town by doing the walk and taking pictures. A few of the sights along the walk include the Elmslie United Church, the island’s first church. 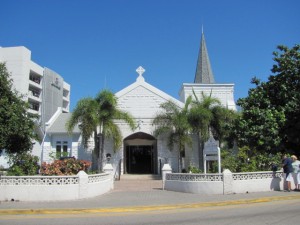 Heroes Square is a large open space with several sculptures and fountains. 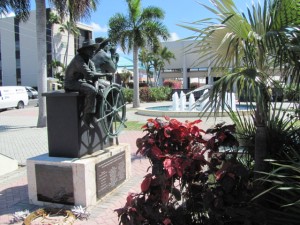 The Cayman Islands National Museum was Drive, the main street along the waterfront. 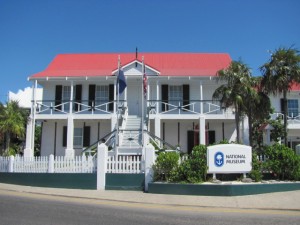