What an incredible day for an ex-Biology/Ecology teacher. Costa Rica is the most eco-friendly country I have ever been to. Besides having the most national parks compared to the size of the country (27% of the land is preserved as national parks), the people are also extremely eco-conscious. Bravo Costa Rica!

We eschewed the excursions offered by Celebrity in favor of making our own arrangements. We left the ship looking for “Wolfie,” (recommended to us by close friends who have been here before). However, before we could find his taxi, we struck up a conversation with a very personable and polite young man who goes by the name of “Freedom.” In the end, we decided to book with his company (CottaBus, I think), since they offered us exactly what we were looking for. Our private tour of the Tortuguero Canal and the Veragua Rain Forest saved us $80 each versus the cruise ship price. In addition, we were back at the ship in 6 hours compared with 10 hours for the Celebrity tour.

Our driver, Dennis Bennett, was exceptional! He gave us a narrated tour of town, then brought us to an overlook for a view of the town from above. 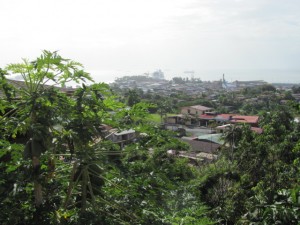 Dennis was also knowledgeable about the local flora and stopped often to give us the opportunity to photograph the country’s many beautiful flowers. 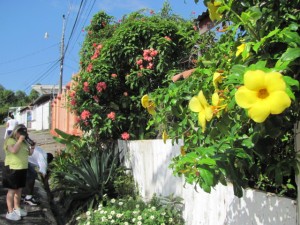 When we reached the Tortuguero Canal, we had a private boat ride, just the two of us, through the canal. In the process we saw a Howler Monkey, a Caiman, a Kingfisher (a bird I have always wanted to see), several iguanas, and numerous other birds. 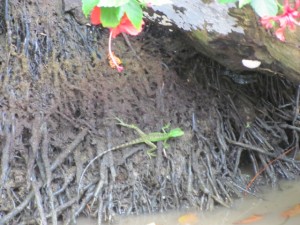 After the canal trip we headed for the Veragua Rain Forest Preserve and our Aerial Tram adventure. The road to the preserve is horrible — unpaved for many kilometers, but interesting since we passed a number of farms and stopped frequently to see birds and flowers.

The Aerial Tram ride was very nice — low impact on the environment yet scenic and exciting for visitors. 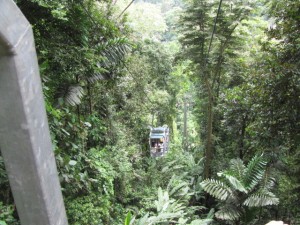 Before our return trip on the tram, we were able to walk several trails, one of which involved 350 stairs to Puma Falls, which I did, 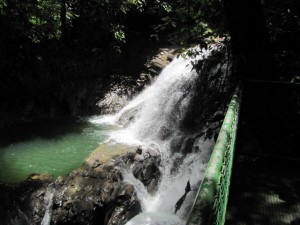 (the stairs were somewhat intimidating but I took my time) 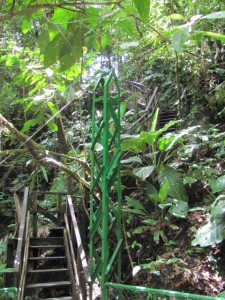 The other trail, called the Trail of Giants, allowed us to see Leaf-Cutter Ants in action. 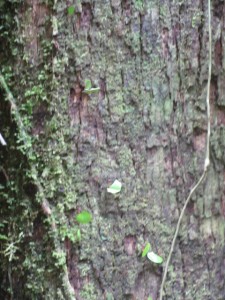 After our return to the Aerial Tram station, our guide took us through several display buildings which featured fauna and floraof the region. He explained that the Reserve has produced these displays to showcase Costa Rica’s biodiversity; people want to come to the rain forest to see animals, but the chances are that they will see little since the creatures are usually active in the early morning and in the evening, times when there are few if any tourists. Also these displays reduce the impact of visitors on the fragile ecosystems. 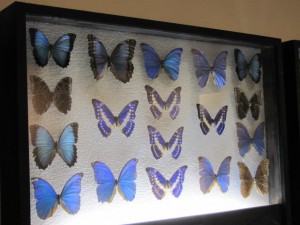 and also several in the Butterfly Garden. 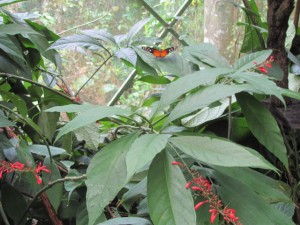